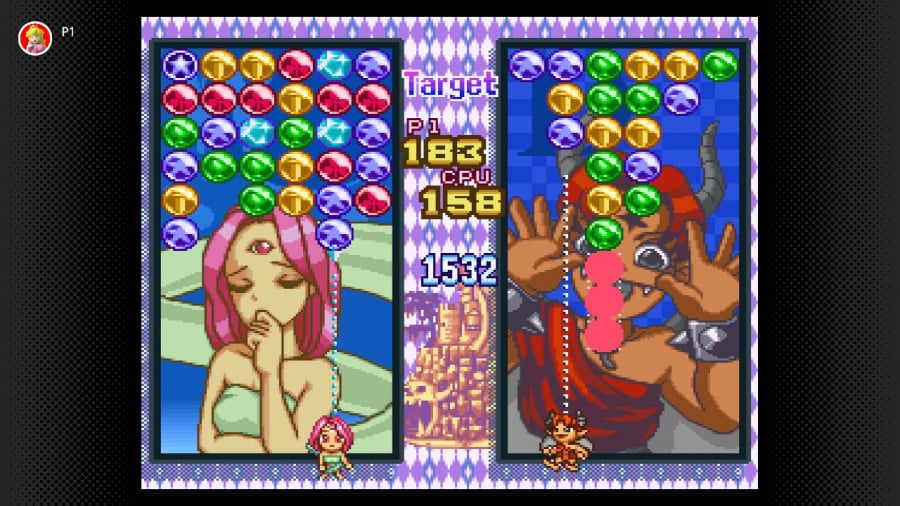 Magical Drop is Data East’s take on the competitive puzzle game, but with a major twist – instead of falling blocks, like Tetris or Puyo Puyo, you control little characters at the bottom of the screen that grab and toss coloured balloons that drop from the top of the screen. Grab, toss, and match three (or more) in a row vertically, and they’ll disappear, as well as popping any other adjacent balloons of the same colour.

The remaining balloons will fall upwards, potentially matching up more colours and creating a combo. This will cause more balloons to show up on your opponent’s screen, with the overall goal being to overwhelm them. If you’d rather not play competitively there are two single player modes – one just presents an enormous playing field and continues until balloons appear too quickly to deal with, while the other presents simple puzzles that you need to solve within a time limit.

Magical Drop II originated on the Neo Geo, and this Super Famicom port is a pretty solid conversion. Some of the animations are missing, but it still looks fantastic for a 16-bit console game. The arcade game also used a generic jester character to represent the player, while the SFC version uses the chosen character themselves. Other changes are fairly minor, like some extra characters being unlocked from the outset.

The arcade game also had a Puyo Puyo-style Story mode where super deformed versions of the characters faced off before each map, though they were strangely silent. Here, they actually exchange some brief dialogue. The other notable change is that the playing field has been reduced from seven balloons in width down to six, due to the lower resolution of the SNES. There are also a few more game types available in the versus mode.

Magical Drop II is pretty good, but it’s still not quite as attractive looking as the Neo Geo original, which is available via the Arcade Archives range on the Switch. Also available is Magical Drop III, generally agreed to be the best game in the series, which has a larger character roster, an expanded game board-style story mode, and other improvements. Most of these additions make this predecessor redundant… although having it on the Nintendo Switch Online service is convenient for those who enjoy (or want to try) Magical Drop without plunking down the cash for it. It’s still a solid title overall.

The SFC version of Magical Drop II was initially Japanese only, but this version is fully in English. The translation is different from the one featured on Retro-Bit’s Data East Classics Collection for the SNES released back in 2018, so it’s believed the version featured on the NSO was originally a prototype created to pitch for an English release, but was ultimately cancelled. It’s certainly cool to see this released, just from a preservation perspective.

With five new additions to Nintendo Switch Online’s catalogue of NES and SNES games arriving today, we decided to review these new/old releases to help you decide which to play first. Enjoy!