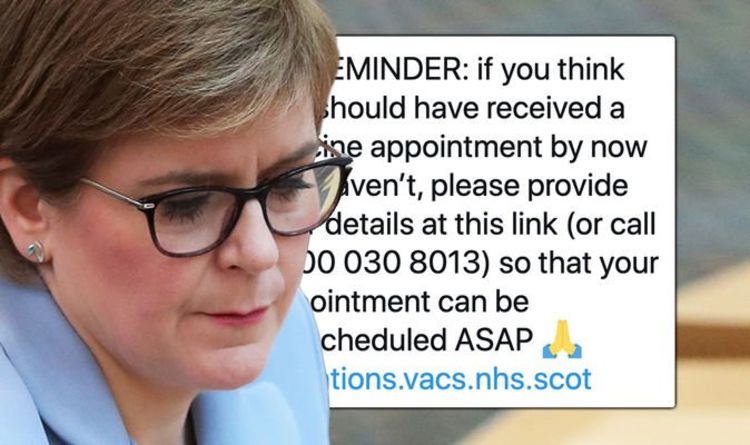 In a statement, the Government said the problem with the system held up letters for “a number” of patients but was unable to provide a figure. The apology comes after Nicola Sturgeon said a “particularly high” number of people failed to turn up for coronavirus vaccines over the weekend – while insisting she was “not pointing the finger” at individuals.

However, it has since emerged if the finger needed to be pointed at anyone, it was her own administration.

A Scottish Government spokeswoman said: “We have identified an issue with our appointment system which has delayed appointment notifications being distributed to a number of patients across Scotland.

“Appointment letters will be issued this week and we believe that patients should still receive four days’ notice of their scheduled appointment.

“We appreciate that this may not be enough notice for everyone affected.

“The appointment letter contains details on how to view or amend your appointment online.

“Our Covid-19 vaccination helpline is also available on 0800 030 8013 to assist with rescheduling if required.

JUST IN: BBC presenter’s death to be probed to see if vaccine had role

It is also understood to be working with health boards on the level of missed appointments to discover whether the issue is localised or more widespread.

Speaking during the Scottish Government’s coronavirus briefing after the mass no-show, Mrs Sturgeon said: “At some sites over the weekend, we saw quite a high level of non-attendance for appointments which had been scheduled, although it is important to stress the overall uptake rates remain incredibly high.

“It’s also important to say that when people don’t attend, there will be a variety of reasons for this and some of them will not be down to the individual.

“So nobody is pointing any fingers here.”

She added: “On the contrary, we all have to work together to make sure we get uptake rates and keep uptake rates as high as we need them to be.

“For all of us that means recognising that getting vaccinated is about protecting ourselves, but it’s also part of our civic duty to each other and to our wider communities.”

Ms Sturgeon suggested that wrong addresses, work commitments and younger people who do not feel as high risk as older age groups could be some of the reasons for missed appointments – although she made no mention of the possibility of administrative errors by her own Government.

She added: “We need to try to accommodate as much flexibility within the system as possible.”

“Anyone who thinks they should have had an appointment but hasn’t – and in some cases this may be because you’ve moved house recently, for example – please go on to the NHS Inform website to arrange an appointment.

“The vaccination section of the site has a section on missing appointment details which provides a form you can submit.”