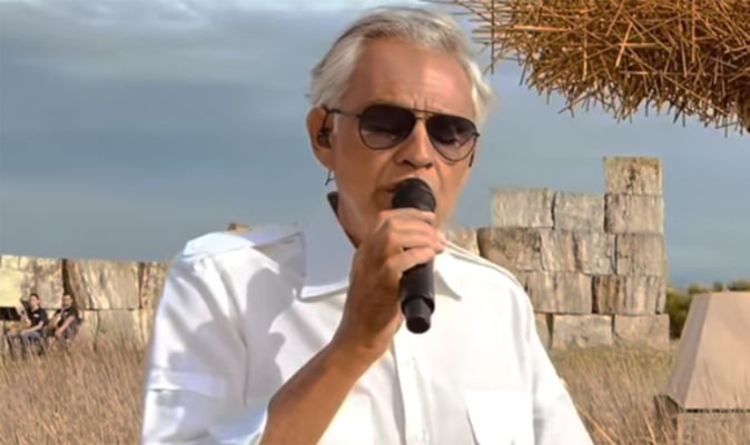 Andrea Bocelli has been captured in a new music video giving a stunning live performance of Melodramma. The Italian tenor was singing from inside the Teatro Del Silenzio alongside Stjepan Hauser. Also known simply as HAUSER, the Croatian cellist is a member of 2CELLOS, while Melodramma was the lead single on Andrea’s 2001 album Cieli di Toscana.
Melodramma was written by Pierpaolo Guerrini and Paolo Luciani and the track was later included on Andrea’s 2007 greatest hits album.

Earlier this week, the 62-year-old and HAUSER were captured performing Time To Say Goodbye together in the same spot.

The iconic song is one of the best-selling singles of all time with over 12 million copies sold worldwide.

Fans will know the Teatro Del Silenzio is an open-air amphitheatre that hosts Andrea Bocelli‘s own concert every July.

The venue’s name translates as Theatre of Silence as usually, the structure remains quiet for the rest of the year, although these performances with HAUSER seem to be an exception.

The cellist posted the Time To Say Goodbye clip on his Instagram page, praising Andrea.

He wrote: “My dear Maestro Andrea Bocelli, one of the purest souls in this world, I’m beyond grateful for your hospitality and honoured to feel like a part of your extraordinary family.

“The song says it’s Time To Say Goodbye but I say this is start of something new!”

Earlier this month, Andrea shared a beautiful tribute song video to his mother Edi Bocelli, who rejected advice from doctors to abort her son over concerns he would be born disabled.

From his birth, the future opera singer had problems with his sight and was later diagnosed with congenital glaucoma, before going completely blind aged 12 after a football match accident.

Edi’s decision to not terminate her pregnancy with him has inspired Andrea’s own pro-life views.

Sharing a lyrics video for the song Mamma, the Italian tenor captioned it: “The first word we learn how to say, the first sound to mean something as if we see in her the heart and the secret of life itself from the start of our earthly adventure: mom!”

Andrea added: “She who, through divine grace, lives the generous mystery of birth, the sacred plan of giving shape and consciousness to clay.

“She, force and breath of the world, the most powerful messenger of Heaven, who teaches us what love is and what it is like. I’m thinking of my mother and affectionately of all mothers, of their unbreakable strength.

“I thank each of them and celebrate the natural setting where motherhood thrives: the family, where we learn and teach the young to choose the path of good. Celebrating Mother’s Day means celebrating life: today especially, but not only today, because mothers deserve it every day of the year. Andrea.”