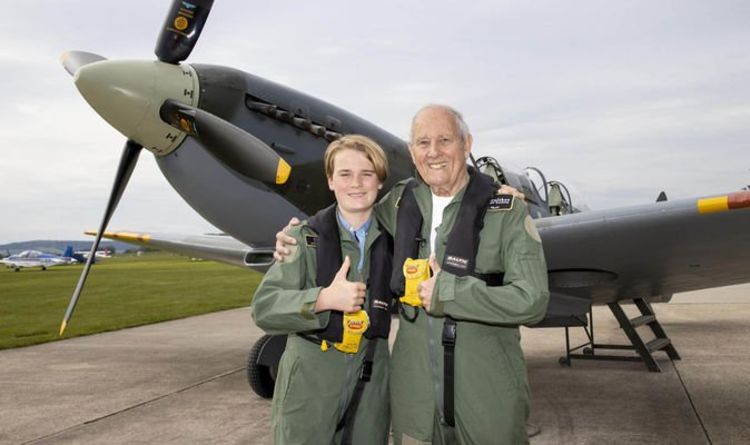 So he sent a heartfelt letter to airfields and private Spitfire owners across the country last summer, asking if anyone could secure him a flight in the classic aircraft. Harrison had written: “It breaks my heart to see him so sad. When we are together now I can tell that he doesn’t have the same amount of fun and his mind is always thinking about Nanny.
“I want him to smile again. The only time he seems happy is when we are talking about the RAF and the Second World War, and so I am trying to find someone that could help me get him up in a Spitfire. His dad was a mechanic in the war but was discharged because of shell shock.”

Staff at the Spitfire Academy, based at Goodwood Aerodrome in West Sussex, were so touched by the appeal that not only did they agree to take Malcolm up in a Spitfire for his birthday but, as a special surprise, they offered to take Harrison up at the same time in a 1940s Harvard.

Harrison, from Sunbury-on-Thames, Surrey, only found out he would be joining his grandad just before the flight from the West Sussex airfield yesterday.

He said: “I was so surprised, it was such an amazing experience. We did a barrel roll, a dive and we did a loop the loop. When I was upside down, it was the best feeling in the world.”

Of his Spitfire flight, Malcolm said: “It was a wonderful experience. I felt fantastic. It is something you have got to experience. To see what that plane can do is just astounding.

“The pilot let me take over the controls and I saw how it could move from left and right. I will always remember it.”

Malcolm, from Hampton, Greater London, has been married to Sandra for 57 years. He was deeply touched by the lengths his grandson went in order to cheer him up.

He said: “He is an amazing grandson. It is unbelievable, he is very persistent.

“There’s nothing better that I could have received than a chance to go up in a Spitfire.”