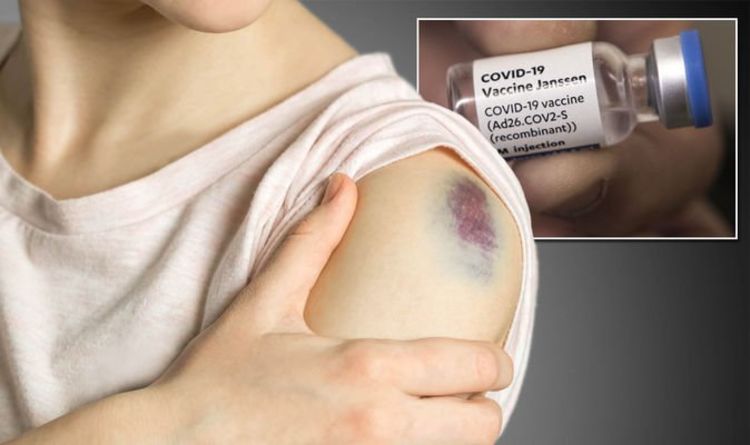 The Covid vaccine, developed by Johnson & Johnson’s pharmaceutical arm Janssen, has been shown to be 67 percent effective overall at preventing moderate to severe COVID-19. Some studies have also said it offers complete protection from admission to hospital and death. But like all vaccines, the Janssen vaccine can cause side effects, although it should be noted not everybody gets them.
You should also get urgent medical attention if you get symptoms of a severe allergic reaction.

With a severe allergic reaction a combination of the following symptoms may occur:

“Very common” side effects, that affect more than one in 10 people, include:

“Common” side effects include:

“Uncommon” side effects, that may affect up to one in 100 people, include:

Allergic reactions and hives are classed as “rare” side effects.

At its meeting on April 20, 2021, the European Medicines Agency’s (EMA) safety committee (PRAC) concluded a warning about unusual blood clots with low blood platelets should be added to the product information for the Janssen vaccine.

But PRAC also concluded these events should be listed as very rare side effects of the vaccine.

The Belgium government announced on Wednesday it was suspending vaccination with the Janssen vaccine for people under the age of 41 following the death of a woman who suffered severe side effects after having the jab.

The woman – who was under the age of 40 – died on May 21, after being admitted to hospital with severe thrombosis and platelet deficiency, a statement by the Belgian health ministers said.

She was vaccinated through her employer and outside of the official Belgian vaccination campaign.

If you get any side effects you should talk to your doctor, pharmacist or nurse, even if it’s not listed above.

If you’re concerned about a side effect it can be reported directly via the Coronavirus Yellow Card reporting site or search for MHRA Yellow Card in the Google Play or Apple App Store and include batch/Lot number if available.