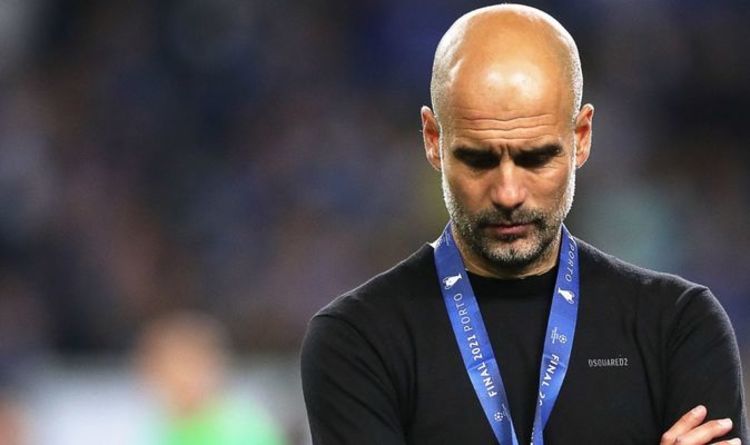 Pep Guardiola insists he did what was best for the team when quizzed on his Champions League final lineup. Manchester City fell short in Porto against Chelsea after Kai Havertz’s winner saw them record a famous night at the Estadio do Dragao.
Thomas Tuchel appears to have Guardiola’s number, having now beaten him three times since arriving at Stamford Bridge.

Guardiola has often faced scrutiny on the European stage with City for tinkering with his team in the crunch matches.

Frustrating defeats to Monaco, Liverpool and Lyon in the past have stopped his side from conquering the game on the continental stage.

Tonight Guardiola left out a defensive midfielder and instead brought in an extra attacker in Raheem Sterling.

Not only has Sterling been out of form but City’s captain Fernandinho is the club’s most-experienced player who has been central to their success in recent times.

Rodri was also absent and named on the bench and the decision appeared to cost City.

Yet Guardiola insisted he made what he felt was the right call.

“I did what was best for the team,” he said to BT Sport’s Des Kelly when quizzed on the lack of a holding midfielder.

Despite falling short in Europe once again, Guardiola remains insistent that there is plenty to be proud of as he looks to rally his troops ahead of next season.

“Exceptional season for us, today we’re sad, but we’ll analyse how exceptional the season was for us. It was a tight game, we had almost first gear chances, they missed one with [Timo] Werner, in the second-half with [Christian] Pulisic,” he said.

“In the second-half, we were brilliant, we were brave but we could not convert the goals, because defensively they are so strong, so fast in the counter-attack. We didn’t allow them to make the process to play, the players were exceptional for them. Yeah, we’ll come back maybe one day again.

“The ambition now is rest. After we will prepare for the next season and try to recover with the players coming back in two or three months. Game by game, we will try to do it.

“It’s the first time we’re at these stages, for us, it’s a moment to be here and hopefully we will return in the future.”