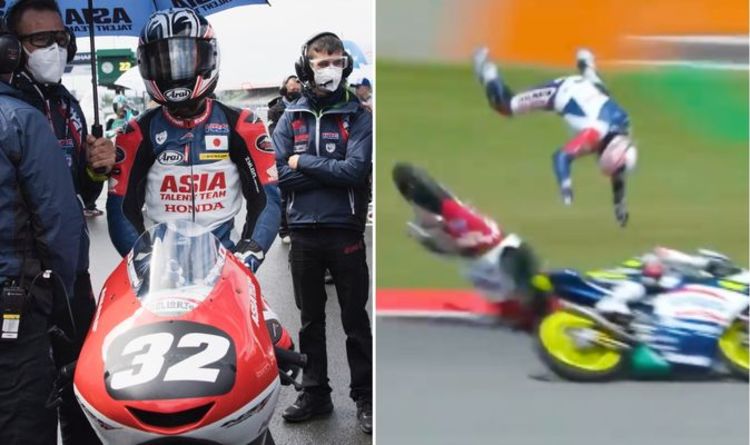 Japanese Moto3 racer Takuma Matsuyama gave a spectacular reminder of just how close to the edge the world’s top riders are when he suffered a huge crash during qualifying for the Moto3 race at the Italian Grand Prix on Saturday.
Matsuyama was drafted in as a replacement for fellow countryman Yuki Kunii at Honda Team Asia after Kunii sustained a broken collarbone at the French Grand Prix earlier this season.

And Matsuyama can consider himself incredibly lucky to have walked away unscathed after a massive high-side crash during the first qualifying session of the day at Mugello.

The Japanese racer applied the throttle a fraction of a second too early as he attempted to get the power down on his way out of a tight left-hander.

The back tyre then started to lose traction before suddenly gaining grip and catapulting the Matsuyama up and over the handlebars at high speed as he crashed down into the tarmac.

“Oh my goodness!” exclaimed BT Sport commentator Gavin Emmett as he talked viewers through the replay of the incident.

“That could have been horrific there.

“He almost flies into the path of Adrian Fernandez.

The crash happened in the first qualifying session of the day, as the riders from the three Grand Prix classes – MotoGP, Moto2 and Moto3 – took their turns on track to qualify as high on their respective starting grids as possible for Sunday’s race.

The Mugello circuit is renowned as one of the fastest, most spectacular circuits on the calendar, and is a firm favourite with the riders.

And South Africa’s Red Bull KTM racer Brad Binder equalled another record as he clocked a spine-tingling 362.4km/h (225.2mph) through the speed trap to join Johann Zarco as co-owner of the fastest recorded speed on a MotoGP bike during a race weekend.

The Moto3 session was eventually red-flagged for a second, more distressing incident after Ayumu Sasaki and Jason Dupasquier were involved in a crash on the exit of Turn 9.

Swiss rider Dupasquier crashed and Sasaki, who was close behind, ended up thrown into the air.

Medics swiftly attended the scene as Sasaki was led away, while Dupasquier received lengthy treatment as an Air Ambulance arrived at the circuit to transport him to hospital in Florence for further treatment.