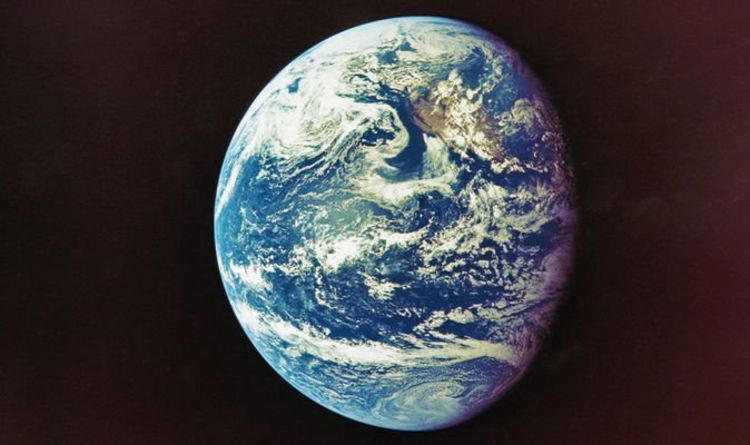 The scientific model of the cosmos states the Big Bang gave birth to the universe some 13.8 billion years ago. Within this incredible period, stars appeared, galaxies developed and planets took shape, with our solar system forming in the last five billion years or so. The US space agency NASA, for instance, states: “When the solar system settled into its current layout about 4.5 billion years ago, Earth formed when gravity pulled swirling gas and dust in to become the third planet from the Sun.”

How do scientists come to these conclusions? They look at the geological record, sediment deposits, and even by dating rocks that have come to our planet from our cosmic neighbours.

But there is a body of so-called Young Earth Creationists who reject attempts to date the planet, through what they believe are flawed methods.

Young Earth Creationists, instead, believe the planet’s history can be traced from the moment of creation to Jesus Christ’s death by closely studying the pages of the Bible.

Although the estimates vary, Young Earth Creationists typically claim the Earth is only 6,000 to 10,000-years-old – and they believe they can back these astonishing figures. How old is Earth: Many people believe the Earth is only 6,000-years-old (Image: GETTY)

Tom Meyer, a professor of Bible studies at Shasta Bible College and Graduate School in California, US, has told Express.co.uk why he thinks the Earth is considerably younger than what we have been taught in schools.

Professor Meyer is sometimes known as the Bible Memory Man thanks to him memorising more than 20 books from the Holy Bible.

Mount St Helens entered a period of intense activity in 1980 that killed more than 50 people.

Although tragic, Young Earth Creationists believe the eruption has highlighted a flaw in attempts to date the planet’s age.

According to Professor Meyer, attempts to age the newly formed cap on the volcano using Potassium-argon dating (K-Ar) have proven “far from accurate”.

The method and its supposed shortcomings were famously highlighted by Young Earth Creationist Dr Steve Austin and the Institute for Creation Research (ICR), when they analysed samples collected from the volcano in 1986.

This has even led to the Mount St Helens Creation Information Center being established “for the purpose of witnessing to the truth of God’s Word in Genesis”.

Professor Meyer said: “The severe faultiness of the dating method should cause everyone who adheres to the belief that the earth is 4,600,000,000 years old to reconsider that belief.

“According to the Creation Ex Nihilo Technical Journal (Volume 10. No. 3, pp-335-343, 1996), using the conventional K-Ar dating methods, the porphyritic dacite which solidified on the surface of the lava dome six years after the eruption dates to 50,000 to 350,000 years old. How old is Earth: Who do you believe? The Bible or scientists? (Image: GETTY)

“Also, the mineral concentrates from the dacite which formed in 1986 gave K-Ar ages of 60,000 to 2,800,000 years old; this pyroxene concentrate was only six years old at the time they tested it.

Professor Meyer believes these discrepancies cast a shadow of doubt on other methods used to date our planet.

He added: “Scientists admit that the K-Ar method isn’t reliable for dating samples less than 6,000 years old; if indeed the universe is 6,000 years old, then of what use is the K-Ar dating method?

“Natural catastrophes like Mount St. Helens continue to be fresh evidence that geological formations aren’t as old as everyone claims. The Earth is young.”

Scientists have, however, tried to explain the Mount St Helens conundrum.

Kevin R. Henke, an American geochemist formerly of the University of Kentucky’s Department of Geology, challenged the Young Earth theory in regards to the US volcano.

In a report published on NoAnswersInGenesis.org.au, he accused Dr Austin and the Institute for Creation Research (ICR), of failing to properly analyse the Mount St Helens samples.

He said: “Furthermore, when Austin submitted his samples to Geochron Laboratories, he failed to heed warnings from the laboratory about the limitations of their equipment.

“Both Austin and Swenson ignored the implications of zoned minerals and Bowen’s Reaction Series on the age of the dacite.

“Obviously, it’s Austin’s improper use of the K-Ar method and not the method itself that is flawed.

“Rather than recognizing the flaws in Austin’s essay, Swenson simply parrots Austin’s erroneous claims without really understanding the chemistry and mineralogy of dacites.”