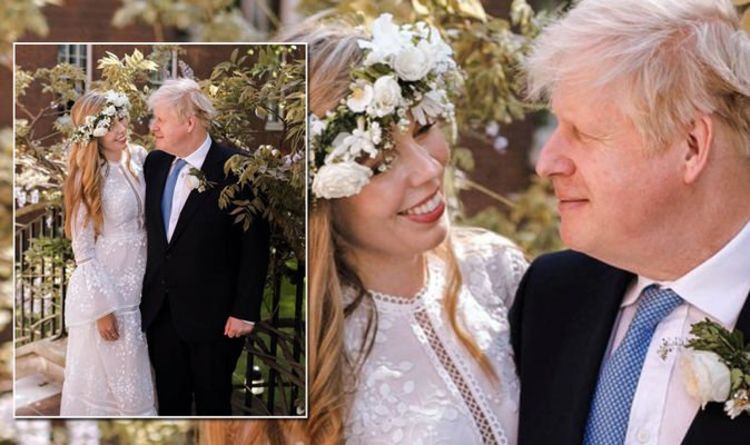 Boris Johnson and Carrie Symonds’ wedding took place in a “small ceremony” on Saturday afternoon, a Downing Street spokesperson has confirmed this morning. The pair got married in Catholic Westminster Cathedral in front of a handful of close family and friends.
Despite being in traditional white, Carrie’s dress was an unconventional choice.

Costing £2,870, it was made by Greek luxury designer Christos Costarellos.

The gown was embroidered with neatly stitched white leaves, and its sleeves were tight at the top but puffed out slightly at the bottom.

Carrie went barefoot for the ceremony and the dress reached her red toe-nailed feet.

The gown’s flowing shape and material added to the weddig’s summer, beachy, and bohemian vibe.

In addition to the embroidered leaves, and keeping in line with the theme of nature, Carrie paired the dress with a floral headpiece.

The headpiece matched the dress due to its white flowers, some of which were daisies and roses.

The roses gave a subtle nod to Carrie and Mr Johnson’s nationalities and perhaps even patriotism, as they represent England.

The rose is England’s national flower.

The Prime Minster usually wears blue ties, therefore he made no exception for his wedding to show his allegiance to the Conservative Party.

A Downing Street spokesperson said this morning that the newlyweds would celebrate their union again with family and friends next summer.

Due to the coronavirus pandemic, their ceremony was small yesterday.

Mr Johnson is the first British prime minister to get married while in office in nearly 200 years.

The happy couple have one child together, Wilfred, who was born in April 2020.