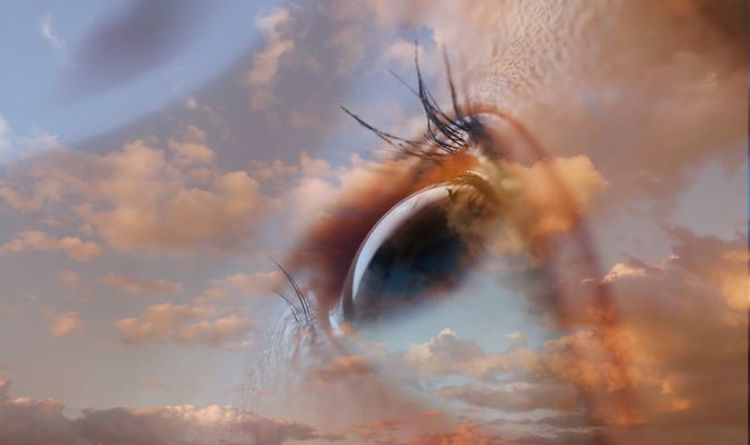 The woman, who is only identified as Rebekah, claims to have stood on the brink of death late last year, following a drawn-out battle with seizures. Rebekah opened up about her brush with death to the Near-Death Experience Research Foundation (NDERF), which investigates reports of life after death encounters. According to Rebekah’s testimony, she collapsed to the ground after feeling a searing pain in her left arm.
She said: “I was on the ground instead of the couch and I couldn’t move.

“My body started going cold as I asked myself, ‘Am I dying?’

“I saw myself on the ground and could even see that the laptop cord was almost wrapped around my neck.”

Rebekah was then overwhelmed with the sensation of flying, claiming it was as if she has been plucked by an eagle.

She claims to have seen the clouds open up before her, revealing a beautiful green valley.

She said: “I just knew and felt a sense of calm and comfort such as I have never experienced before.”

All of a sudden, darkness took over but Rebekah could still see a light.

At this stage of the near-death experience (NDE), she saw “things I had done in my life” as well as scenes of things she had never done but always dreamed of doing.

Rebekah said: “Then my daughter came into view and I thought about the repercussions if I went to the light.

“I knew she would never forgive herself if she knew she had a part in my passing.

“I knew I had to get back to my body. I needed to go back by focusing on the pain in my arm.”

Rebekah lived to tell the tale and though she has not shared it with many, she claims it has changed her life forever.

Medical scientists, however, would not be so quick to take the story at face value.

Experts agree NDEs can have a profound and lasting effect on people but many do not think they are proof of paranormal or supernatural phenomena.

A number of theories have been put forward to try and explain why people may experience such visions and memories during a moment of trauma.

According to one possible explanation, NDEs are hallucinations triggered by a lack of oxygen flowing to the brain.

In the book The Myth of an Afterlife: The Case against Life After Death, authors Michael Martin and Keith Augustin wrote: “Reports of near-death experiences (NDEs) with suggestive or manifestly hallucinatory features strongly implies that NDEs are not glimpses of an afterlife, but rather internally generated fantasies.”

The authors also wrote: “In any case, the dying brain does not appear to be as disorganised as many survival proponents have led us to believe.

“It appears to be capable of generating experiences – challenging the ‘unsupported belief that the brain cannot possibly be the source of highly vivid and lucid conscious experiences during clinical death’ – though it still remains an open question whether the dying brain does in fact produce them.”

It is clear people who gone through an NDE, tend to look at the experience in a positive light.

According to a 2004 report published by The University of Virginia School of Medicine researchers, this is particularly true of patients who do not have a history of auditory and visual hallucinations, like schizophrenia.

The report reads: “Our finding of a high prevalence rate and predominantly positive attitudes toward auditory hallucinations following an NDE reinforces the need for further research into the physiology, phenomenology, and aetiology of these experiences.”

after, before, death, eyes, Flash, moved, towards, woman