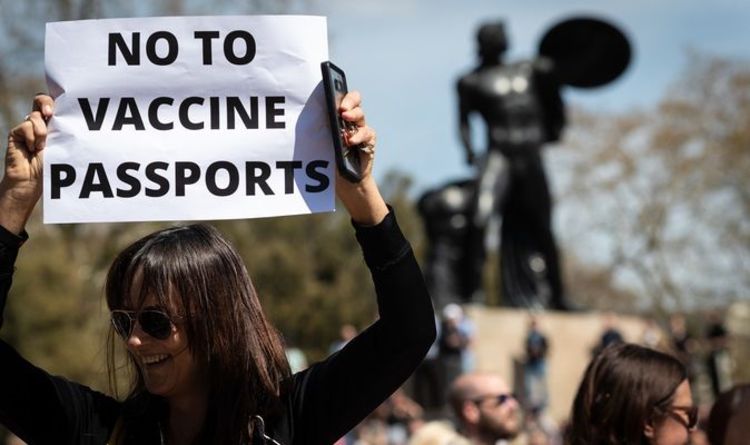 Officials working on the coronavirus status certification review reportedly do not believe the law will be changed. It was previously suggested entry to large events could be granted if they present proof of a Covid vaccination, a recent negative test or a positive antibody test for the virus.
Government ministers were looking at changing the law to require COVID-19 passports at football matches, concerts, festivals and business conferences.

However, sources close to the Government said the proposed plans are now “dead”.

One Government source said: “It’s not a case of ‘it’s finely balanced’.

“It’s not going to happen.

“Everyone says it is dead.”

Another source told The Telegraph: “No one is talking about it still as a potential thing.

“It has been killed off really.”

While the Government has decided not to change the law for Covid passports at large events, it does not mean such schemes will not be adopted in the future.

While showing proof of a jab has become accepted for international travel, their use domestically has raised ethical questions.

Prime Minister Boris Johnson already ruled out using Covid passports for activities such as visiting the supermarket or the GP.

Mr Johnson also hinted he is not in favour of their use in pubs or restaurants.

Michael Gove, appearing before a select committee on Thursday, stressed the Government was not yet decided on introducing COVID-19 passports.

He said: “I think there’s been a perception among some, not in this committee, that the Government has locked on to this in the same way as JFK said that he was going to put a man on the moon, that we’re going to introduce a policy for certification come what may, hell or high water.

“That’s not the case.

“We’ve been looking at it pragmatically, to see if it can add value and, if not, then we would not press ahead with it.”

A Whitehall source said: “Michael has been listening very carefully to the arguments for and against Covid certification and the review has left no stone unturned in examining whether there is a case for them domestically. He will make recommendations to the PM soon”.

A Government spokesman said: “The Covid status certification review is ongoing and no final decisions have been taken yet.

“The Chancellor of the Duchy of Lancaster will update Parliament after recess.”