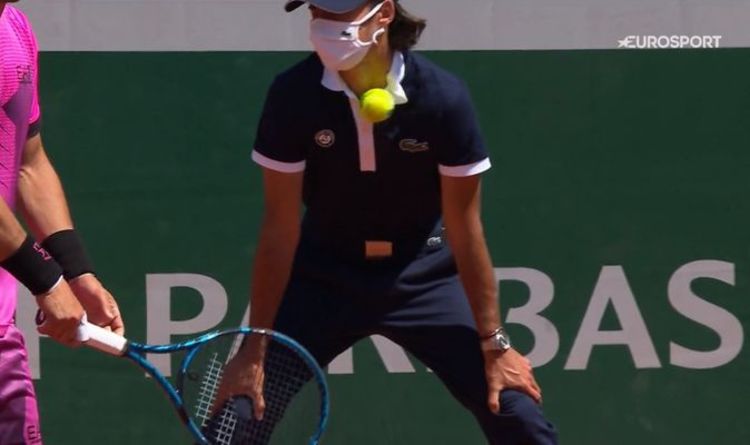 A line judge nearly suffered a nasty injury after failing to dodge a powerful serve by Gregoire Barrere in the Frenchman’s defeat to Fabio Fognini on the first day of the French Open.

Barrere was serving during the maiden game of the final set to try to work a way back into the match against the world No 27 Fognini.

The Italian had won the opening two sets 6-4, 6-1 at Roland Garros.

Fognini was leading 15-0 at the start of the third set when Barerre fired a first serve down the court.

The ball was called out by the umpire but continued to fly in the direction of a line judge who failed to move out of the way.

The line judge just about managed to turn her head as the ball struck her in the lower neck region. It drew a wince from the crowd.

Nadal is in the same half of the draw as both Djokovic and Roger Federer. A potential semi-final between Nadal and Djokovic is possible.

“Of course, it’s easier to win Roland Garros when you have won events in a row before during the clay-court season, as I’ve done throughout my career.

“But at the same time I’m nearly 35 and my situation is a little bit different. The main goal for me is to give myself a chance. I want to give myself chances to be competitive in every single event.”

Djokovic is hoping to win the French Open for just the second time.

The 34-year-old added: “I saw the draw. It’s the first time, I think ever, where Roger, Rafa and myself are in the same half of the draw in any Grand Slam.

“It’s going to be very interesting for sure. Only one of us can make the final. I’m going to obviously do my best to be that guy who reaches the final match.”