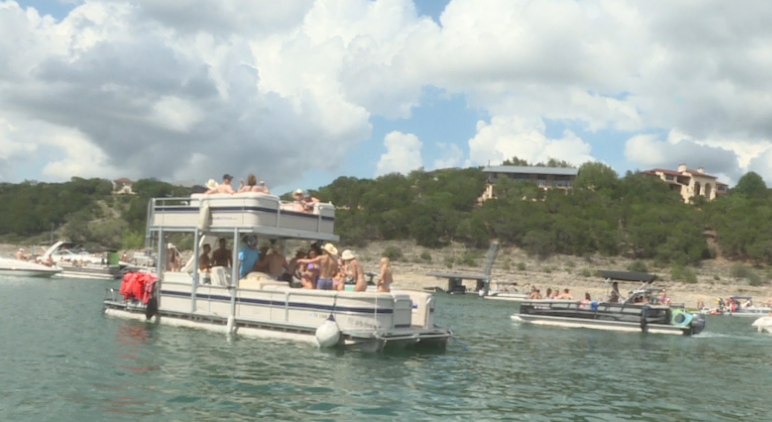 AUSTIN (KXAN) — Leading into Memorial Day — as always — lakes and rivers are expected to be busier.

“Enjoying the weather, a little wake-surf, a little partying, mingling, having a good time,” one lake-goer said.

Out in Devil’s Cove on Lake Travis, dozens flooded in and out Sunday as they took advantage of the holiday weekend.

With more people on the water, those who are familiar with popular areas for boating and tubing are warning safety should always be a priority.

“You get a lot of boat traffic that’s becoming unsafe — people cutting each other off, personal water crafts getting too close to boaters,” Owner of Lake Travis Scuba, Robert Weiss said.

Weiss explained that as the lake changes, some aren’t aware of deep or more shallow areas. He said this can lead to boat-scathed surfaces, and creates a risk for drowning if people aren’t paying attention to their surroundings.

Weiss urges if you’re out drinking, you should pace yourself as drownings become a concern.

“They’re not thinking about some of the possible dangers of being out on a lake,” Weiss said.

Taking a splash into some weekend fun — crowds of thousands are also showing up to the Guadalupe River in New Braunfels, officials said. They’re pleading with everyone to plan ahead before taking a float.

“This is not a swimming pool, or a ride, or attraction,” River Operations Manager for the City of New Braunfels, Amy Niles said. “If you’re not a strong swimmer, we encourage you to find some other form of water recreation. We would like all guests to use a life jacket.”

You will catch police out patrolling Lake Travis, stopping boaters when necessary.

Something else to be mindful of, is making sure you leave your valuables behind when going out on the water.

Weiss said he and his team have found thousands of dollars worth of expensive items this Memorial Day Weekend, including a $ 30,000 watch.