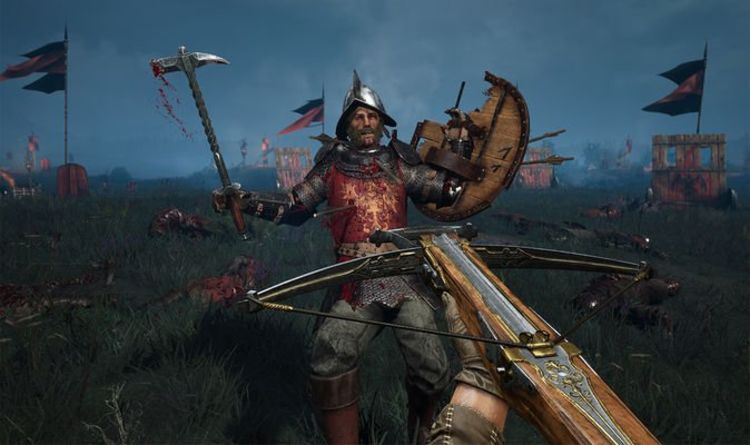 The Chivalry 2 open beta has proven popular with gamers but will soon come to an end so that the development team can focus on the game’s final release.

As previously confirmed by the team, Chivalry 2 will be released on June 8 across PS4, Xbox One and PC.

There is also a next-gen version of Chivalry 2 being released for PS5 and Xbox Series X, which will come with 4k resolution, 60FPS, and more advanced graphic features.

For those who might not have jumped into the beta yet, Chivalry 2 is a first-person slasher that pits two warring factions against each other.

Most maps and modes come with objectives that need to be completed before a counter runs out.

This can mean capturing points on the map, or destroying key areas. Attackers are focused on this, while the defending team tries to halt the progress required.

In Chivalry 2 you’ll play as the Agatha Knights or the Mason Order: two factions with radically different views on how to rule the kingdom, and who should sit on the throne.

The story is pretty secondary to the combat, with gamers creating their own narratives and rivalries on pitched battlefields.

The only downside to all this fun is that the Chivalry 2 open beta will be ending very soon to make way for the full experience.

WHAT IS THE CHIVALRY 2 OPEN BETA END TIME?

Developers Torn Banner Studios has confirmed that the Chivalry 2 Open Beta end time has been set for 4pm BST on Tuesday, June 1.

The Beta is scheduled to run until June 1 at 11am ET in North America, meaning there is still plenty of time to jump in and start playing.

It should be noted that when the beta was first announced, Torn Banner said that you would not need an active PlayStation Plus subscription to participate.

However, with the launch of the Beta, this was quickly determined not to be working, and on an active investigation, a cause has been found.

This means you will need to have an active PS Plus account if you want to play on PS4 or PlayStation 5 consoles.

If you have managed to jump up the rankings and have unlocked your favourite weapons and armour, we have some bad news for you.

The official Chivalry 2 Open Beta site confirms that all progress will be reset before the game is released on June 8.

This means you will not get to complete any of the stuff you have received, although there could be pre-order rewards released for the game’s launch.

It should also be noted that this week’s Chivalry 2 open beta is free to download and play, with no pre-order required.

Cross-Play is active, but teaming up with other players on different platforms might not be available until sometime after launch.

A new message from Torn Banner Studios explains: “Cross-platform, and cross-generation parties (PC to PS5, PS4 to PS5, etc.) and a server browser for console platforms are under active investigation without a timeline at this moment, but we know these features are important and hear your feedback.