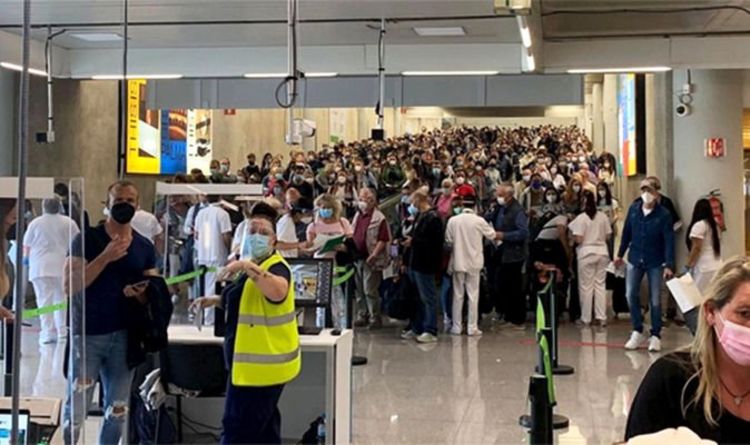 The fact that Spain is on the amber list – meaning it’s a Covid-risk country – and that there is a 10 day mandatory quarantine on return doesn’t seem to intimidate Britons. The number of flights from England and Spain has tripled in just a few days.

Last week, 1,344 flights departed from the UK to amber and red list destinations, being Spain and Greece the most popular ones.

“The number of flights between England and Spain has tripled in just a few days. Tourists seem to ignore the Government’s warnings not to travel to the territories that are on the amber list,” reported The Times.

The Government strongly advises not to travel to amber list destinations, and tourists who don’t follow the 10 day quarantine on return could face fines up to £10,000.

Spain expects to be included on the green list after its next review, on June 3.

The Canary and the Balearics Islands have already asked the Government to be treated separately and to be added to the green list even if mainland Spain doesn’t make it.

Although the Government is considering all the options, according to reports, some of Britain’s favourite island holiday destinations, including Ibiza and Mallorca, could stay on the amber list.

That is because there are concerns regarding the UK Border controls as the influx of holidaymakers increases.

Just a few days ago, controversial images showing a packed airport in Palma de Mallorca were shared on social media.

Agglomerations of passengers waiting for passport control were seen and many raised concerns.

There were big crowds of people without any safety distance, in an airport that clearly lacked personnel.

Mallorca airport assured that it was a specific moment due to the arrival of different international flights at the same time and that the agglomeration disappeared in a matter of 15 minutes.

However, many worry that the situation could become unsustainable once the real tourism boom begins.

At this point, it seems unlikely that Spain will be added to the green list this week.

The first review will take place on June 3 but it changes will come into effect a week later, on June 10 at 4am.

The UK Government plans stipulate that the travel rules will be reviewed every three weeks.

Some countries that could potentially make it to the green list next are Malta, the Canary Islands, Crete, Corfu or Rhodes, in Greece.