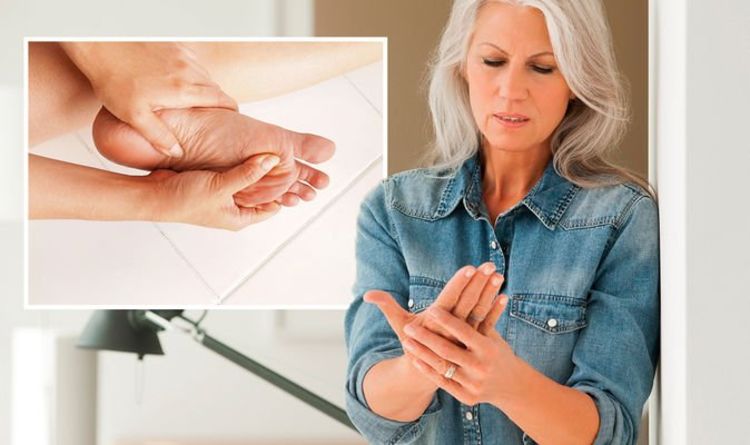 Vitamin B12 is a nutrient that performs a number of critical roles in the body. Three of the most important are aiding the production of red blood cells, the formation of DNA, and the normal functioning of your nervous system. In terms of the latter, if you have consistently low B12 levels, your nervous system can become damaged.

According to Holland and Barrett, pins and needles, also called paraesthesia, is a “reflection of possible nerve damage or nerve issues.”

The health food shop explains: “Vitamin B12 is important for the metabolic process that produces myelin.”

Myelin surrounds your nerves in order to protect and insulate them.

Holland and Barrett continues: “If you do not get enough B12, myelin is produced differently, and your nervous system does not function well.

READ MORE: B12 deficiency symptoms: The four clues in your mouth that indicate low B12 levels

“A prickling sensation in your hands and feet can be a sign that this is happening.”

It is worth noting that pins and needles can have benign causes, such as sitting on your own leg for a while.

You can also get pins and needles from a range of conditions, such as sciatica.

Other telltale signs of low B12 levels include:

DON’T MISS
Diabetes type 2: Texture of your hand is a symptom [INSIGHT]
How to get rid of visceral fat: Simple dietary swap [TIPS]
B12 deficiency: Three physical signs to spot [ADVICE]

The NHS explains: “See a GP if you’re experiencing symptoms of vitamin B12 or folate deficiency anaemia.”

According to the health body, these conditions can often be diagnosed based on your symptoms and the results of a blood test.

It’s also important for vitamin B12 deficiency to be diagnosed and treated as soon as possible.

“Although many of the symptoms improve with treatment, some problems caused by the condition can be irreversible if left untreated,” warns the NHS.

Vitamin B12 is found naturally in a wide variety of animal foods and is added to some fortified foods.

According to the National Institutes of Health (NIH), plant foods have no vitamin B12 unless they are fortified.

You can get recommended amounts of vitamin B12 by eating a variety of foods including the following:

Vitamin B12 is found in almost all multivitamins.