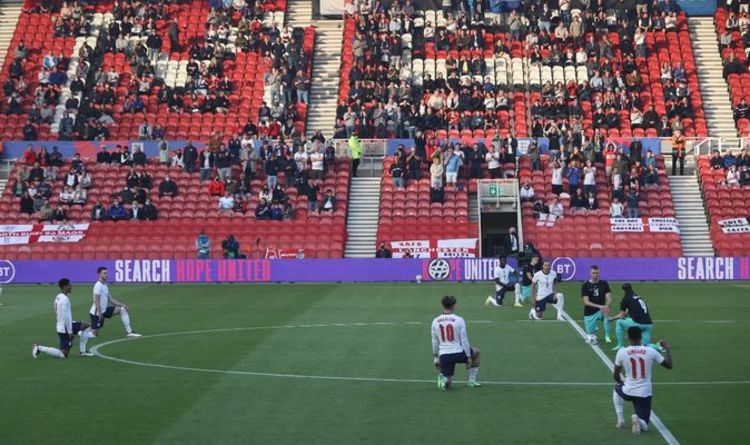 England’s players found themselves in the receiving end of boos from their own fans before a ball had even been kicked on Wednesday night.

Gareth Southgate’s side were lined up and ready for kick-off at Middlesbrough’s Riverside Stadium when the referee blew his whistle and all 22 players took the knee.

The gesture, which has become a common sight throughout football as a collective message of support for social change, was met by boos from a significantly loud number of the England fans in attendance, before the rest of the fans in attendance applauded loudly to show their support.

The booing, which was acknowledged by ITV Sport commentator Sam Matterface as “a mixed reaction,” promoted a wave of social media reaction as fans and celebrities alike took to Twitter to voice their displeasure at the booing fans on Teeside.

“Disgraceful that some football fans would boo the players taking the knee,” tweeted one, while another went further in his condemnation of those who booed.

“Wonder how England’s black players feel about the booing when they took the knee?” he tweeted.

“Will those same booing morons cheer a goal scored by Sako, Bellingham or Mings?

“If you boo that, you’re supporting the racist abuse many black players get after games,” he continued.

“Kneeling is nothing to do with the BLM organisation. It’s about the aims of anti-racism. That’s what they just booed.”

Another took the subsequent applause as a sign that the overwhelming majority supported the kneeling gesture, tweeting, “Boos against an anti-racism statement being drowned out by loud applause is my favourite song.”

Broadcaster Max Rushden was among those dissenting voices on social media, and he tweeted with the #KickItOut hashtag as he praised those whose applause eventually drowned out the boos.

“The fact even one person boos taking the knee is reason to keep doing it,” he posted.

“Pleased with those at the Riverside whose applause drowned out the others. But still. #KickItOut.”