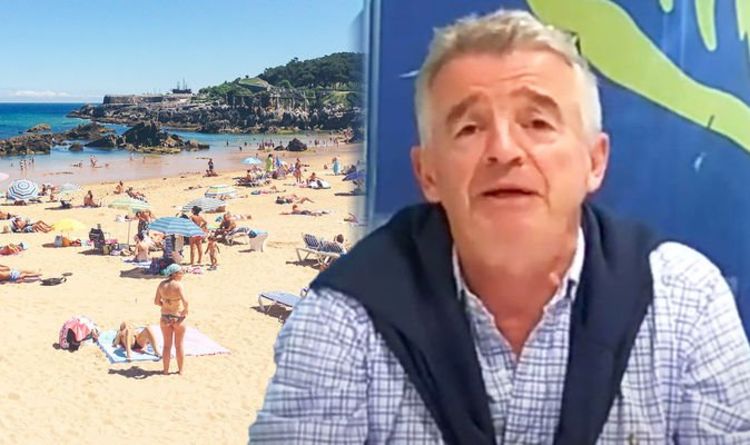 Ryanair‘s CEO Michael O’Leary made calls to get Britons back on holiday today. He stated restrictions should ease as more countries are vaccinated.

The Ryanair businessman made calls to Transport Secretary Grant Schapps to update the countries on the green list.

He stated Britons should be allowed to travel to popular tourist destinations in Europe.

“We’ve made two points to Grant Schapps,” he continued.

“Firstly, they put Portugal on the green list in May but left Spain, Italy and the Greek islands off.

The Government is thought to be reviewing travel restrictions within the next week.

This could see more countries being taken off the red and amber list and added to the green list.

Depending on the country they are visiting, Britons currently face pricey PCR tests and even quarantine hotel stays when travelling.

O’Leary suggested some travel requirements should be lifted for those going on holiday.

“The second [point] is we have this bizarre situation [where] all those countries have already removed restrictions on vaccinated UK visitors because of the vaccine success in the UK,” the Ryanair boss continued.

“But we have the situation where vaccinated UK families who go on holidays still have to come up with a negative PCR test on their arrival back into the UK despite the fact they’ve been to those countries.

“It’s bonkers. Europe is now moving towards being fully vaccinated and the spread of Covid and recent hospitalisations has collapsed due to the success of the UK vaccine programme.”

O’Leary added there should still be restrictions for long haul flights to countries that are not as far down the vaccination process.

However, he said Britons should be able to travel freely to many European countries from as soon as this month.

“It’s now time for June, July and August [to] add Spain, add Italy and add Greece to the green list,” he concluded.

“Allow British travellers to go abroad safely to Europe on their holidays.”