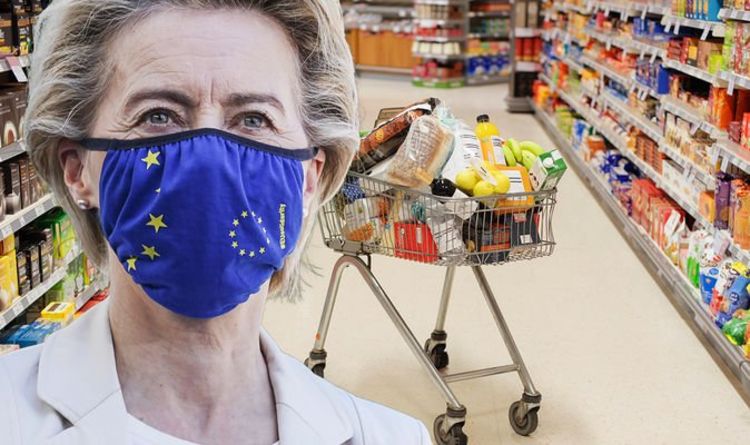 This reintroduced customs checks on the trade of many products between the bloc and Britain.

It also resulted in some checks on goods travelling from Great Britain to Northern Ireland.

This move infuriated Northern Irish unionists who are demanding the inspections are scrapped.

She commented: “Global food prices are currently at their highest in seven years, shipping costs have risen threefold since 2019, and commodity prices are climbing.

“We will likely see these costs filter through in the second half of this year, and with the additional Brexit red-tape this autumn, retailers may be forced to pass on some of these costs onto their customers.”

Retail giant Marks & Spencer has reported a sharp rise in costs this year due to Brexit related red-tape.

It said: “The free trade agreement with the EU means we will not incur tariffs on our core UK sales.

“However potential tariffs on part of our range exported to the EU, together with very complex administrative processes, will significantly impact our businesses in Ireland, the Czech Republic and our franchise business in France which we are actively working to mitigate.”

Whilst Britain formally quit the EU in January 2020, it remained closely tied to the bloc until the end of December, during the Brexit transition period.

During this time the UK remained part of the European Single Market.

It also continued paying into the EU’s budget and imposing many laws made in Brussels.

This ended at the close of December when Boris Johnson’s new EU trade deal came into effect.

Tensions surged in Northern Ireland over the new checks, with loyalist rioting across the province in April.

Brexit Minister Lord Frost has branded the current arrangement “unsustainable”, and is urging the EU to compromise.

The UK infuriated Brussels by unilaterally deciding it would delay implementing some of the new border checks.

In response, the EU launched legal action against Britain.