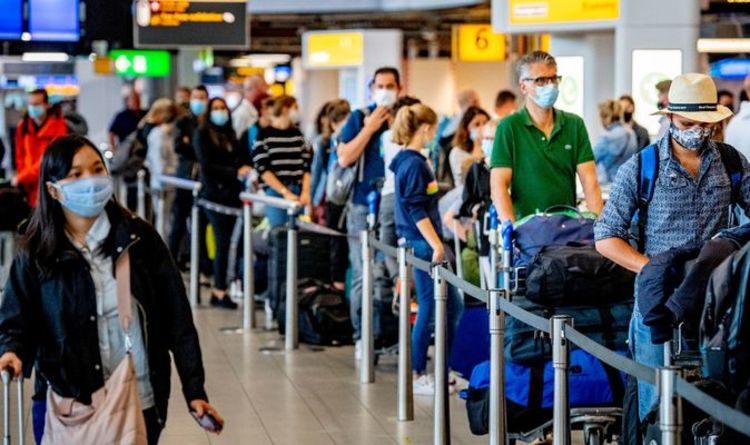 Britons can now travel abroad to the UK’s green list countries, including Portugal, Gibraltar, Iceland and more. However, long waiting times at airports during the coming weeks and months could throw summer holidays into chaos.

Travel experts had previously warned of possible long queues and waiting times at airports during the summer holidays, but this is the first time the Government has confirmed it could happen.

Last month, the Border Force union warned that holidaymakers arriving at UK airports could face queues of up to 10 hours.

The ISU, the union for borders, immigration and customs workers, also predicted long queues at the British border due to increased coronavirus checks.

In early May, Lucy Moreton, professional officer at the ISU, said: “We saw delays for seven or eight hours last summer, and with all the additional checks then we could see people waiting as long as 10 hours.

“There’s no way around the delays at the border because Border Force officers will have to check the Covid status of all arrivals and that takes around 15 minutes per person.

“So, people from all over the world will be mixing inside for a long time.”

The UK’s travel ban was lifted on May 17, meaning that Britons can now travel to certain countries quarantine free.

Britons can also travel to countries on the UK’s amber and red lists, but they will have to take additional coronavirus measures and quarantine for 10 days.

However, travel industry bosses have called for more clarity on when more destinations will be added to the green list amid criticisms the Government has been too cautious in unlocking international travel.

EasyJet boss Johan Lundgren said: “The decision to put so few European countries into the green tier is simply not justified by the data or the science and is inconsistent with the approach to reopen the domestic economy.

“So we call on the Government to provide transparency on decision-making and clarity on when we can expect other European countries to join the green list so that consumers and airlines alike can plan for this summer.”

Additionally, Airlines UK, an industry body that represents British flight carriers, urged Mr Johnson and his Government to make “major additions” to the list during the next review tomorrow, June 3.

Chief executive Tim Aldersdale said: “This is a missed opportunity and, with so few countries making it onto the green list, represents a reopening of air travel in name only.

“By contrast, the EU has said vaccinated people will be able to travel without restrictions, which leaves the UK at risk of falling behind and not opening up International travel to key markets across Europe as well as the United States.”

The traffic light system will be reviewed every three weeks, with four key tests to determine which category a country will fall into.

These are the percentage of the population that has been vaccinated, the rate of infection, the prevalence of variants of concern, and the access to reliable scientific data and genomic sequencing.