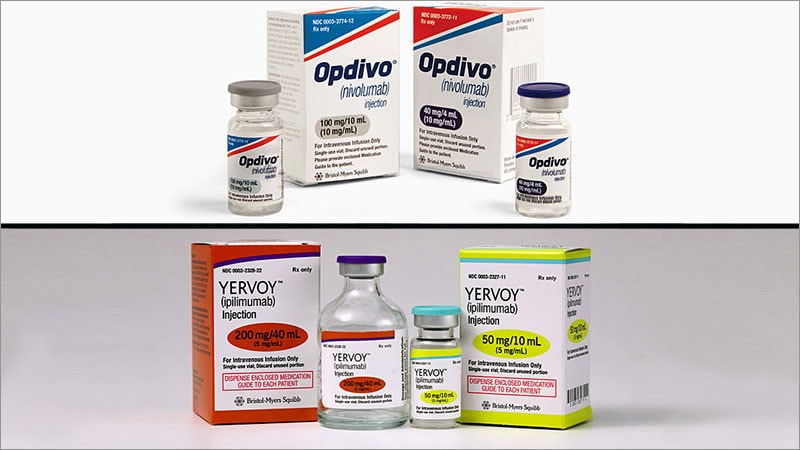 Combination therapy with the immunotherapies nivolumab (Opdivo) and ipilimumab (Yervoy) is now approved in the European Union for the first-line treatment of adults with unresectable malignant pleural mesothelioma (MPM).

This is the first new treatment for mesothelioma in more than 15 years.

This aggressive and often deadly disease is frequently associated with asbestos exposure. “Mesothelioma can be a devastating diagnosis for patients and their families, and the disease has a significant impact throughout Europe, which has the highest incidence rate of mesothelioma globally,” said Stefania Vallone, board member, Women Against Lung Cancer in Europe.

The European Commission’s approval of the combination drug regimen allows for its use in 27 European Union member states, as well as Iceland, Liechtenstein, and Norway.

The regimen has thus far been approved in six other countries, including the United States, where it received US Food and Drug Administration approval in October 2020, as reported by Medscape Medical News.

The approvals are based on findings of superior overall survival (OS) versus standard-of-care chemotherapy with pemetrexed and cisplatin or carboplatin among patients with unresectable MPM in the open-label, multi-center, randomized phase 3 CheckMate 743 trial. Prespecified interim analysis data from the trial were published in January 2021 in The Lancet.

“After many years of limited progress in the treatment of malignant mesothelioma, we saw an important clinical benefit for patients with nivolumab plus ipilimumab in the CheckMate 743 trial,” lead study author Paul Baas, MD, PhD, department of thoracic oncology, Netherlands Cancer Institute and the University of Leiden, said in a press statement from the drugs’ maker, Bristol Myers Squibb.

Improved Survival and Other Outcomes

Baas initially reported the findings from CheckMate 743 — the first positive phase 3 trial of an immunotherapy in unresectable malignant mesothelioma — during the presidential symposium of the World Conference on Lung Cancer 2020, as reported by Medscape Medical News at the time. He noted that the trial “met its primary endpoint of statistically improving overall survival for the experimental arm vs chemotherapy in a prespecified interim analysis,” and also said the regimen should be considered a new standard of care.

The CheckMate 743 trial compared the immunotherapy regimen with chemotherapy in a cohort of 605 treatment-naïve patients. Participants were randomized 1:1 to nivolumab and ipilimumab for up to 2 years or six cycles of combination chemotherapy.

Median progression-free survival was 6.8 months and 7.2 months in the immunotherapy and chemotherapy arms, and the confirmed overall response rates were 40% and 43%, respectively.

Median response duration was 11.0 months versus 6.7 months, and at 2 years, the response was ongoing among 32% versus 8% of patients in the immunotherapy and chemotherapy arms, respectively.

“The safety profile…in first-line MPM was manageable using established adverse event management protocols and consistent with previous studies of the combination in other tumor types,” Bristol Myers Squibb notes in its press release.

This latest approval is the fourth for combination nivolumab plus ipilimumab treatment for an advanced cancer type. The dual immunotherapy is also indicated in the European Union for non-small cell lung cancer, melanoma, and renal cell carcinoma.

Sharon Worcester is an award-winning reporter for MDedge News, part of the Medscape Professional Network.