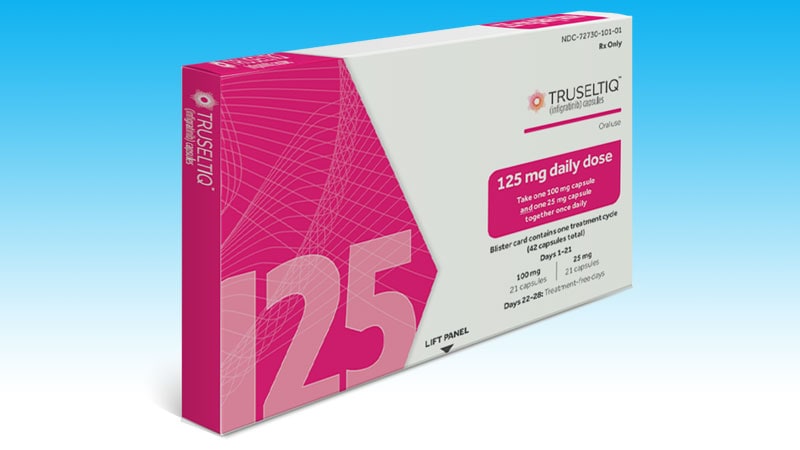 The agent is an orally administered, ATP-competitive tyrosine kinase inhibitor of FGFR.

It was granted an accelerated approval by the US Food and Drug Administration (FDA) on the basis of response rate data from a single arm, open label phase 2 trial, dubbed CBGJ398X2204. This trial involved 108 patients with locally advanced or metastatic cholangiocarcinoma — including 107 with stage IV disease, the FDA noted in a press release.

These types of bile duct cancers, which affect about 20,000 people in the United States and European Union each year, are aggressive and often diagnosed in later stages when treatment options are limited and prognosis is poor. The median 5-year survival rate is 9%, the drug’s maker, BridgeBio Pharma affiliate QED Therapeutics, and its partner, Helsinn Group, noted in their joint press release.

The FDA also approved the FoundationOne comprehensive diagnostic (CDx) genomic profiling test as the registrational companion CDx device for identifying patients with FGFR2 fusion or other rearrangement who might benefit from treatment with infigratinib.

FoundationOne CDx is a comprehensive genomic profiling (CGP) test for solid tumors, currently approved as a CDx test for 26 unique therapies. It is the only tissue-based CGP test approved as a companion diagnostic test for infigratinib, according to the device maker, Foundation Medicine

Patients enrolled in CBGJ398X2204 received infigratinib at a once-daily dose of 125 mg for 21 consecutive days followed by 7 days off therapy, in 28-day cycles until disease progression or unacceptable toxicity.

The overall response rate was 23%. One patient experienced complete response and 24 had partial response.

The duration of response was 5 months, and in eight of the 23 responders the response was maintained for 6 months or more.

“Serious risks include hyperphosphatemia and retinal pigment epithelial detachment and monitoring for these adverse reactions during treatment is recommended,” the FDA notes in its press release, adding that “[c]ontinued approval for this indication may be contingent upon verification and description of clinical benefit in confirmatory trial(s).”

In addition to the pivotal second-line trial of infigratinib for bile duct cancer, QED Therapeutics is also enrolling patients in the phase 3 PROOF trial comparing the agent with gemcitabine plus cisplatin in the first-line setting.

Enrollment is also ongoing in trials looking at infigratinib for bladder and urinary tract cancers and achondroplasia.

The company has also launched ForgingBridges, a “comprehensive patient support program designed specifically to provide education, access and affordability resources for patients during their TRUSELTIQ journey.”

Sharon Worcester is an award-winning reporter for MDedge News, part of the Medscape Professional Network.