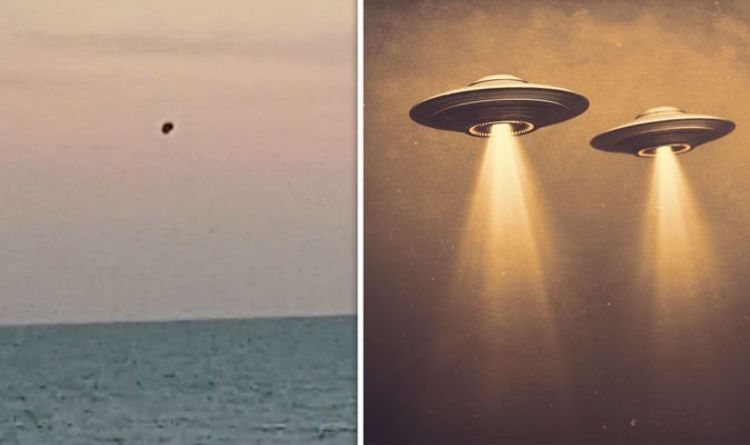 Beachgoers in Florida were stunned to see what appeared to be a UFO travelling through the skies. The object in question looks as if it is perfectly spherical and pitch black. It hovers in a straight line, barely moving off course along the horizon.

The statement said: “Object flew west to east and disappeared about 500 feet above the ocean.

“Object suddenly appeared flew by for a couple of minutes and then disappeared.”

Mr Waring claimed UFOs have the ability to travel to sub-ocean bases.

He did not offer any explanation as to how, however.

The conspiracy theorist wrote: “The clip is 1 min and 12 seconds and shows a craft tilting slightly and seems to be a UFO in a thick almost pentagon shaped craft.

“The object was seen during sunset and flew over the ocean and suddenly disappeared from sight.

READ MORE:UFOs ‘are real!’ insists expert ahead of US intelligence report

While there is no proof that UFOs are here, the sightings and claims from conspiracy theorists can lead to bigger questions.

Chris Impey, university distinguished professor of astronomy at University of Arizona, wrote for The Conversation: “While UFOs continue to swirl in the popular culture, scientists are trying to answer the big question that is raised by UFOs: Are we alone?

“Astronomers have discovered over 4,000 exoplanets, or planets orbiting other stars, a number that doubles every two years.

“Some of these exoplanets are considered habitable since they are close to the Earth’s mass and at the right distance from their stars to have water on their surfaces.