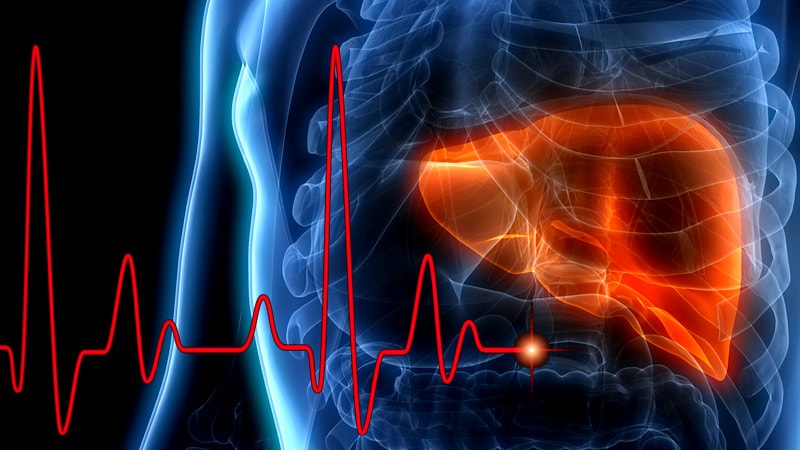 Anti-apolipoprotein A-1 (ApoA-1) antibodies are common in non-alcoholic fatty liver disease (NAFLD) and may not only drive its development but also underlie the link between NAFLD and cardiovascular disease, suggests a novel analysis.

Conducting a clinical analysis and a series of experiments, Sabrina Pagano, PhD, Diagnostic Department, Geneva University Hospital, Geneva, Switzerland, and colleagues looked for anti-ApoA-1 antibodies in patients with NAFLD and then examined their impact on hepatic cells and inflammatory markers.

They found that nearly half of 137 patients with NAFLD were seropositive, and that the antibodies were associated with increased lipid accumulation in the liver, altered triglyceride metabolism, and pro-inflammatory effects on liver cells.

“We hypothesize that anti-ApoA-1 IgG may be a potential driver in the development of NAFLD, and further studies are needed to support anti-ApoA-1 IgG as a possible link between NAFLD and cardiovascular disease,” Pagano said.

The research was presented May 31 at the European Atherosclerosis Society 2021 Virtual Congress.

Asked whether anti-ApoA-1 antibodies could represent a potential treatment target for NAFLD, Pagano told theheart.org | Medscape Cardiology that they have “already developed a peptide that is recognized by the antibodies in order to try to reverse the anti-ApoA-1 deleterious effect.”

While this was successful in vitro, “unfortunately we didn’t observe…the peptide reverse of these anti-ApoA-1 effects in mice, so…for the moment it’s a little early,” to say whether it represents a promising target.

He said that his own global burden of disease analysis, which is set to be published soon, showed that the worldwide prevalence of NAFLD is 11%, “representing almost 900 million cases,” and a more than 33% increase in prevalence in the past 30 years.

Consequently, any “attempt to have effective, especially early, diagnosis and treatment,” is highly anticipated.

Banach said the findings from the experimental analyses are “very interesting and promising,” especially regarding the pro-inflammatory effects of anti-ApoA-1 antibodies.

However, he underlined that the clinical part, looking at antibody seropositivity in patients with NAFLD, was limited by the lack of a control group, and there was no indication as to what treatment the patients received, despite it being clear that many were obese.

Banach also believes that, taking into account the patient characteristics, it is likely that most of the patients had the more severe nonalcoholic steatohepatitis (NASH), and “it would be additionally useful to see the autoantibodies levels both in NASH and NAFLD.”

Nevertheless, the clinical utility of measuring anti-ApoA-1 antibodies is limited at this stage.

He said that the lack of “good, easy, and cheap diagnostic methods based on both laboratory and imaging data” for NAFLD means it would be difficult to determine whether assessing antibody seropositivity “might be indeed an added value.”

They are also independently associated with cardiovascular disease in the general population, as well as atherosclerotic plaque vulnerability in both mice and humans.

She said that ApoA-1 antibodies have a metabolic role in vivo, and have been shown in vitro to disrupt cholesterol metabolism, promoting foam cell formation.

Studies have also indicated they play a role in hepatic fibrosis, predicting the development of cirrhosis in individuals with chronic hepatitis C infection.

The team therefore set out to determine the presence of anti-ApoA-1 antibodies in individuals with NAFLD, defined here as fatty acid levels >5% of liver weight, as well as their effect on hepatic cells.

Working with colleagues at Magna Græcia University of Catanzaro, in Catanzaro, Italy, they obtained serum samples from 137 patients with NAFLD confirmed on ultrasound.

The patients had an average age of 49 years, and 48.9% were male. The median body mass index was 31.8 kg/m2. Cholesterol levels were typically in the intermediate range.

They found that 46% of the participants had anti-ApoA-1 IgG antibodies, “which is quite high when compared with the 15%-20% positivity that we retrieved from the general population,” Pagano said.

This revealed that anti-ApoA-1 IgG antibodies were associated with a significant increase in liquid droplet content in hepatic cells compared with both cells treated with control IgG (P = .0008), and untreated cells (P = .0002).

Next, the team immunized apolipoprotein E knockout mice with anti-ApoA-1 or control IgG antibodies. After 16 weeks, they found there was a significant increase in liver lipid content in mice given anti-ApoA-1 antibodies vs those treated with controls (P = .03).

They then asked whether anti-ApoA-1 antibodies could affect triglyceride metabolism. They examined the expression of the transcription factor sterol regulatory element binding protein (SREBP) and regulation of the triglyceride and cholesterol pathways.

They also found that expression of two key enzymes in the triglyceride pathway, fatty acid synthetase and glycerol phosphate acyltransferase, was substantially decreased in the presence anti-ApoA-1 antibodies.

In both experiments, the untreated hepatic cells and those exposed to control IgG antibodies showed no significant changes.

“These results suggest that negative feedback…turns off these enzymes, probably due to the lipid overload that is found in the cells after 24 hours of anti-ApoA-1 treatment,” Pagano said.

Finally, the researchers observed that anti-ApoA-1, but not control antibodies, were associated with increases in inflammatory markers in liver cells.

Pagano suggested that the inflammatory effects are “probably mediated by binding anti-ApoA-1 antibodies to toll-like receptor 2, which has been previously described in macrophages.”

No funding was declared. The study authors have disclosed no relevant financial relationships.