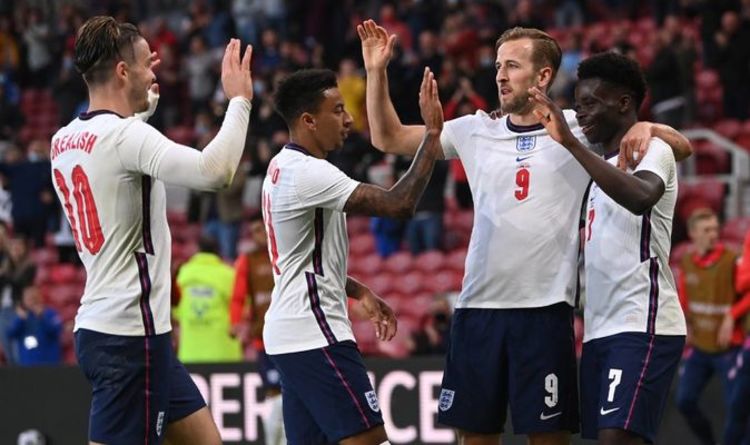 England manager Gareth Southgate was relatively satisfied with his side’s performance in their 1-0 win over Austria on Wednesday night. Southgate gave a run-out to 15 players in the first friendly ahead of the European Championships, which start next week.

The match at Middlesbrough’s Riverside Stadium was a chance for fringe players to impress, with Chelsea and Manchester City players absent following involvement in Saturday’s Champions League final.

After a tight first-half of few opportunities they took the lead when Bukayo Saka scored from a tight angle after a well-worked move involving Jesse Lingard and Jack Grealish.

Jordan Pickford was forced into making a few good saves, including tipping Marcel Sabitzer’s curling shot onto the bar, while he also had to be alert to clear Ben Godfrey’s goalbound pass-back.

JUST IN: Brexiteer’s fury as England players ‘take the knee’ during match

While the game was overshadowed from an England perspective by a late injury to Trent Alexander-Arnold, Southgate was pleased by the overall performance.

“I thought we started very well, I thought we used the ball well in the first hour or so,” he told ITV post-match.

“We were playing against a very good team, they’ve got some very good players. [David] Alaba, [Marcel] Sabitzer, they get in between the lines well.

“I thought the first hour was good in terms of the quality, after that we needed to make a lot of changes and preserve people.

“But that was understandable considering the changes we had to make.”

It was far from a polished performance from England’s second-string side, with a few nervy moments in front of a reduced capacity crowd in Middlesbrough.

Godfrey’s heart-in-mouth moment after coming off the bench came after the man he replaced could – and perhaps should – have given away a penalty.

In the first half, Mings appeared to drive his arm straight into Austria striker Sasa Kalajdzic inside the area, only for the referee to miss the incident.

But there were some positives to take for Southgate, who saw Grealish complete a full match after overcoming a shin problem which marred the back-end of his season with Aston Villa.

Arsenal youngster Saka was also bright throughout, playing in attack alongside Harry Kane and Grealish and was rewarded with his first England goal.

England will play Romania in a second friendly on Sunday at the Riverside before they begin their Euro 2020 campaign against Croatia at Wembley on June 13.

Further Group D matches against Scotland and the Czech Republic follow on June 18 and June 22 respectively.