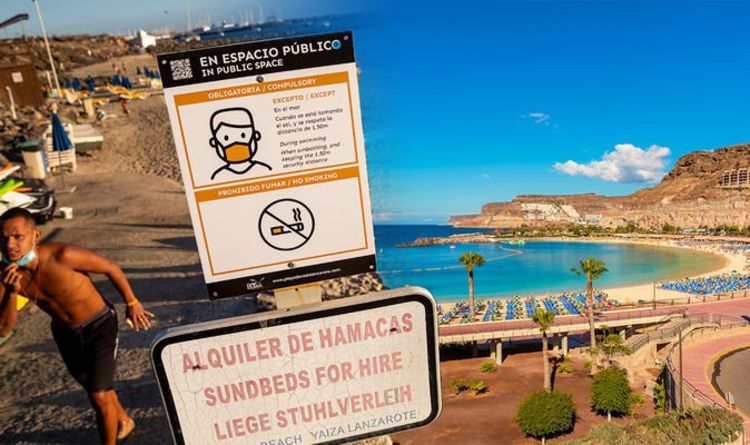 Among the holiday hotspots expected to make it onto the UK’s travel green list today was Spain‘s Balearic and Canary Islands, based upon their COVID-19 rates and vaccination roll-out. However, the archipelagos were served a blow when the UK Government confirmed no new additions would be made to the UK’s green list.

According to Canary Islands Government Tourism Advisor Christina Del Rio, the islands “should have a different treatment” due to how “safe” they are.

Ms Del Rio told BBC News: “We have been working on the pandemic situation for a year and a few months. We have developed strategies to make it a safe destination.

“Most of our population is already vaccinated.

At the time of writing, El Hierro has no confirmed cases of COVID-19.

The accumulated incidence over the previous seven days in the Canary Islands stands at 32.72 cases per 100,000 of the population.

Ms Del Rio continued: “The Canary Islands and the rest of the archipelagos should have a different treatment in this situation.

“We can control [COVID-19] much better and we can show it.

“You have shown it in the UK and we can show it in the Canary Islands. The treatment and the procedures should be much more flexible for tourists.”

There are also major concerns for the “economic situation” in the Spanish archipelago which is heavily reliant on tourism from the UK.

“We have a very strong relationship with airlines and traders and we understand customers need a clearer situation to fly,” said Ms Del Rio.

Airlines have already hit out at the Government for its “confusing” decision.

A British Airways spokesperson said: “This is incredibly disappointing and confusing news, not just for aviation but also for our customers. The UK has reached a critical point and urgently needs travel with low-risk countries, like the US, to re-start the economy, support devastated industries and reunite loved ones.

“With high levels of vaccinations in the UK being matched by other countries, we should see the UK Government adding destinations to ‘green’ as soon as possible – not turning its back on a traffic light model which we were led to believe was based firmly on scientific data.”