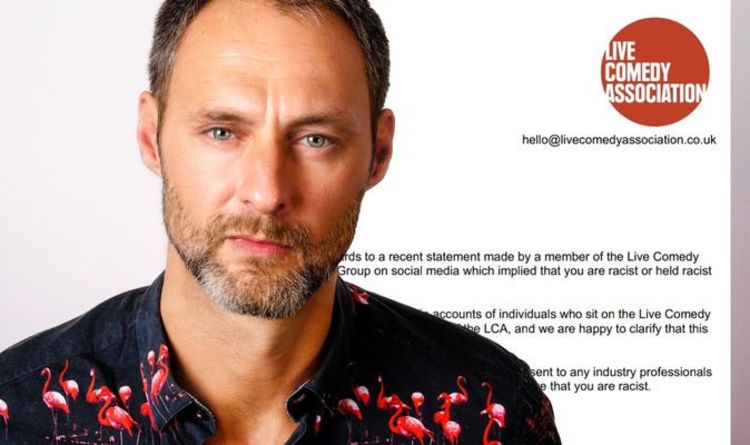 The trolling lost Leo Kearse work and got so bad that the Live Comedy Association gave him a letter formally saying that they did “not believe” he held racist views. This has done little to appease the woke Twitter mob, Mr Kearse claimed – who said they continue to abuse him online.

The 44-year-old professional comedian said: “There’s a liberal witch hunt in the arts against anyone who doesn’t kowtow to the woke narrative.

“The cultural power is held by woke liberals and anyone who stands up against it will be sent to the metaphorical gulags.”

Ironically, the professional comedian became a target after he appeared on a Radio 4 programme about a lack of diversity in the industry last year.

During the broadcast, he spoke about the lack of “working class and right-wing representation among BBC comedy”.

READ MORE: Brexit UK ‘getting desperate’ in scramble for deals’

He accused the BBC of having a “lazy sneery anti-working class bias” before adding: “There’s no diversity. The diversity in BBC comedy runs skin deep.

“It’s run by a nepotistic Oxbridge cabal who just get the Oxbridge people with a slightly different skin colour to present things.

This enraged Live Comedy Association (LCA) rep Saima Ferdows who responded to a tweet quoting Mr Kearse by saying: “Was once told Leo is right-wing but not racist…ok then.”

DON’T MISS:
Housing delays for migrants spark fears of ‘mob unrest’ [INSIGHT]
How quickly the Indian variant is spreading in YOUR area [MAPS]
Food shop alert as YOUR bill to soar due to EU red tape [ANALYSIS]

The appearance led to other trolling and many bookers and promoters unfollowed him on social media or openly telling him that he was blacklisted, he claimed.

At the time he demanded an apology but Ms Ferdows tweet remains live.

Instead the LCA gave him a letter saying that it did not believe he held “racist views”.

He added: “It cost me work. Instead of deleting the tweet, the LCA sent me this letter confirming I’m not racist.

“It’s as much use as a babysitter having a letter confirming they’re not a paedo.”

He added: “(She) smeared me on Twitter as a racist – despite never having met me or spoken to me.

“(This was) based on the fact that, like most of the country, I’m right wing – despite our Tory government having the most ethnically diverse cabinet in history.

“In the wake of the BLM protests, accusing someone of racism in a culture that assumes guilt is hugely damaging.

“Her accusation was circulated through the industry and many bookers and promoters unfollowed me on social media or openly told me I was blacklisted.

“I’ve lost work because of this, and my reputation has been damaged.”

Ms Ferdows told Express.co.uk: “My one tweet about him got 21 likes and one retweet – I hardly call that smearing.

“I have not since tweeted about him.”

She claimed that Mr Kearse’s “constant” social media posts about her were infact a “smear against me” and said the episode has left her feeling “quite suicidal”.

The film producer has consulted a lawyer about the post.

“My lawyer’s advice is that I’ve done nothing wrong and I don’t need to take the tweet down,” she said.