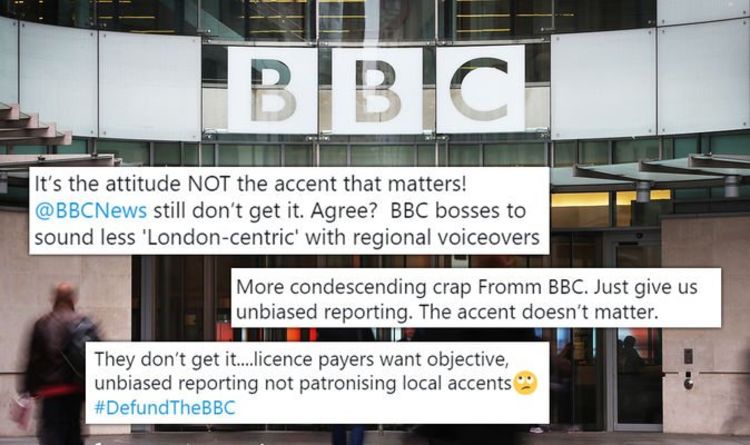 The BBC has announced plans to introduce “bespoke” regional voiceovers between programmes in a bid to make the corporation feel less London-centric. BBC1 shows broadcast in the North West, North East, Yorkshire and Lincolnshire will feature announcements made in local accents. But social media users have heavily mocked the plans, with several saying the move shows the BBC are still out of touch with its audience.

Dozens of people have criticised the plans on Twitter, with several pointing out the BBC should instead focus on its reporting.

“Just give us unbiased reporting. The accent doesn’t matter.”

Another person said: “It’s the attitude NOT the accent that matters! BBC News still don’t get it.”

A third wrote: “If the condescending lefties at the BBC understood northerners, they would realise they don’t need broadcasters speaking to them ‘in their own accent’.

“These are proud people who wear jacket and tie in the club.

JUST IN: Sturgeon fury over campaigner’s ‘England get out of Scotland’ banner

The plan to use regional accents was announced by the BBC’s director of nations, Rhodri Talfan Davies.

The move forms part of the corporation’s “across the UK” initiative.

Mr Talfan Davies said: “We are tailor-making the feel of the channel for more areas.”

In an interview with Sky News, the BBC boss was quizzed on whether the move was “a little bit condescending and superficial” but he denied the claim.

He said: “It would be superficial if we weren’t also radically shifting our focus across network television – if I was to say: ‘Let’s give BBC1 a northern voice.'”

Mr Talfan Davies also revealed programmes such as BBC2’s Newsnight and Radio 4’s Today will go on the road to different cities.

He said: “If we’re all living within the M25 bubble, that inevitably has an impact on the editorial choices we make.

“So I believe it will make a difference.”