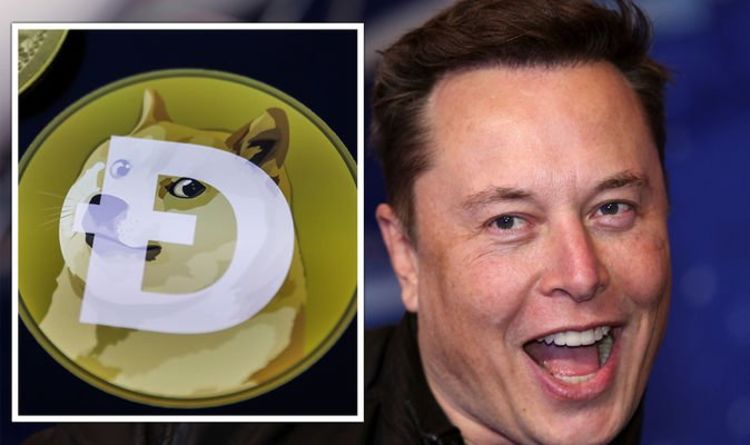 After a quiet couple of days, positive news about Dogecoin being added to Coinbase inspired a sudden surge in price for the “meme cryptocurrency” on Wednesday. It shot up by more than a third within the space of just a few hours and today is still trading at around $ 0.40 (£0.28). Backed by self-proclaimed “Dogefather” Mr Musk, the token has risen more than 12,000 percent since the start of the year, and hit an all-time high last month of $ 0.72 (£0.51).

And crypto analyst Motiur Rahman believes it will surge once more.

Writing in his May report for Daily Forex after the coin dipped at the end of last month, he stated: “Based on price action, it is anticipated that Dogecoin will rebound as investors are expected to get back into the market.

“The short-term moving averages are still gapping up.

“It is an indicator that the price is overall trending up faster than the historical average despite the current correction.

“Looking further ahead, Dogecoin charts point to potential growth, as evidenced by its weekly charts.

“The Dogecoin price chart shows an upward trajectory with consistent gains for six months. The upside momentum is supported in its price action this month.”

And Mr Rahman tipped Tesla CEO Mr Musk to play an important role in that forecast.

He added: “Elon Musk has had a big impact on Dogecoin’s price action. He is the sole reason why Dogecoin is where it is today.

“Dogecoin has experienced significant growth from being a joke coin into one of the most valuable cryptocurrencies and can attribute most of its success to Elon’s tweets and large following, which propelled it to its current success.

“Musk, who still shows interest in Doge, recently stated that Dogecoin would be used to fund SpaceX’s trip to the Moon next year.

“However, he later called Dogecoin a “hustle” on primetime television, and nobody was sure if he was joking or not.

“In any case, whether positive or negative, it is likely that the buzz of publicity which has already been created around Dogecoin will continue to keep the interest high and may well produce a strong recovery in the coin’s price.

“This will be one of the factors that might not just see Dogecoin push past its recent highs but possibly test new highs above $ 1 as well.”

Mr Musk celebrated the recent news of Dogecoin being added to Coinable by sharing a meme on Twitter of the token, adding “it’s inevitable”, in an apparent reference to the incoming surge.

He has also called on people to submit ideas for Dogecoin improvements and upgrades and fuelled rumours he is working with doge developers.

Mr Musk’s support, alongside his dwindling interest in Bitcoin and other cryptocurrencies, has added legitimacy to Dogecoin.

Britain’s Financial Conduct Authority (FCA) has previously warned investors of the risks that come with investing in cryptocurrency.

They said: “If consumers invest, they should be prepared to lose all their money.

“Some investments advertising high returns from crypto assets may not be subject to regulation beyond anti-money laundering.

Express.co.uk does not give financial advice. The journalists who worked on this article do not own cryptocurrency.