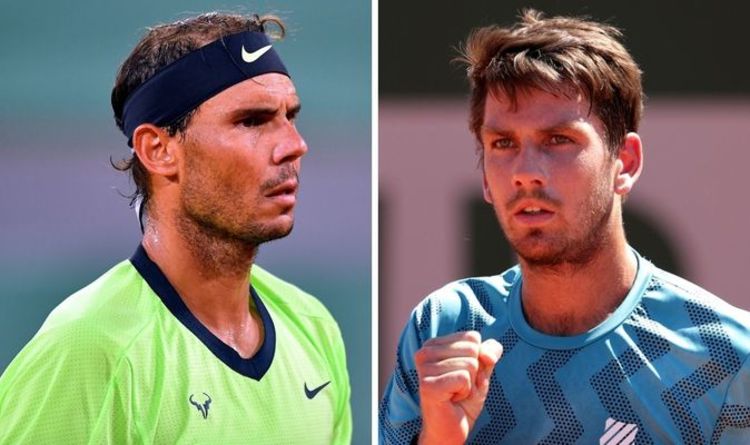 British No 2 Cam Norrie has admitted that he is relishing the challenge of facing Rafael Nadal at the Spaniard’s favoured French Open on Saturday afternoon. The pair will go head-to-head for a place in the fourth round of the competition, with Norrie going into the match as the clear underdog against his vastly superior opponent.

Nadal breezed into the third round with a commanding victory over Richard Gasquet on Thursday evening to set up a meeting with the South African-born Brit.

The 35-year-old has gained a formidable reputation as the ‘king of clay’ after winning all but three editions of the French Open since 2005.

He will be widely expected to brush Norrie aside on Saturday on his way to a record 21st Grand Slam title, but his unfancied opponent has refused to rule out the possibility of a sensational upset.

The two players have already faced each other twice since the turn of the year, with Nadal winning every single set in their respective duels at the Australian Open and Barcelona Open.

However, Norrie has suggested that the lack of expectation on him to succeed at Roland Garros could aid his chances of pulling off a shock victory.

“It is another great opportunity to have a crack at him [Nadal],” the 25-year-old told reporters.

“Obviously I’m going to be the underdog going in there, so no pressure on me. I will go out, see if I can execute my game and frustrate him.

“It is another wonderful experience for me playing him again in the third round of a slam, especially where he’s been very dominant.

“I feel great physically, which is a bonus for me. I’ll back my legs against anyone, even against Rafa. But I’m going to have to execute, and it’s not going to be easy.”

Norrie has enjoyed an impressive French Open campaign so far, defeating Bjorn Fratangelo and Lloyd Harris in his first two matches at the tournament.

The world No 41 could potentially achieve a career-high ranking on Saturday, but admitted that there is still plenty of room for improvement in order to start raising his game to the next level.

“It would be great for me to get a career high,” added Norrie. “I think I’m a lot more calm in bigger moments than I had been in the past.

“I’ve been very consistent and have kept the momentum with me, not really letting too many little things throw me off. I’ve been pretty dead set on improving and bringing my level every day.

“I don’t think I’m playing, like, out-of-this-world excellent. I’m doing a lot of fundamentals well, and I think that’s paying off.”

Norrie is the only British player remaining in the French Open after the premature exits of Johanna Konta and Heather Watson.

Dan Evans was also dumped out in the opening round of the competition by unseeded Serbian hopeful Miomir Kecmanovic despite winning the first set.

‘No, ahead, clash, French, given, me’, Nadal, Norrie, open, pressure, Rafael, warning