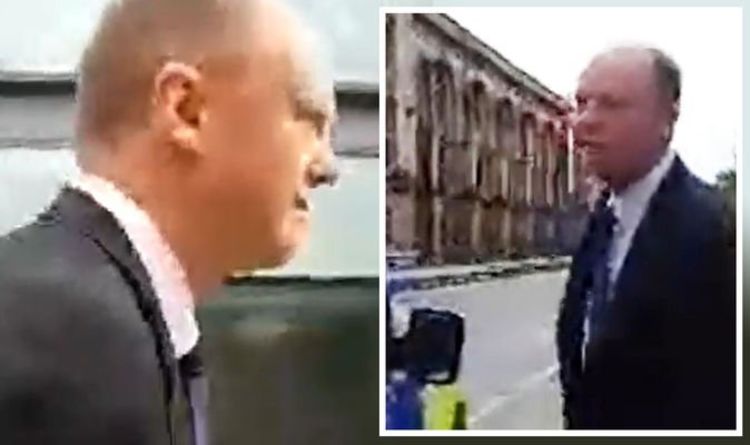 The video, which was shared online by the person who confronted the Chief Medical Officer for England in Oxford, saw Prof Whitty walking down a street as he was being followed and bombarded with questions.

“Oxford-AstraZeneca right in the centre – what a surprise you’re here.

He then questioned whether Bill Gates is “funding this”.

Prof Whitty refused to reply to his comments and is seen stopping beside a police van to ask if the officers can stop the man following him.

After the video was shared online, many were quick to defend Prof Whitty, with Tory MP Tom Hunt condemning the sick attack.

Speaking to Express.co.uk Mr Hunt said: “I condemn it.

“Clearly any fair-minded person will utterly condemn this sort of harassment.

One person wrote: “This is appalling!

“Not good at all, Chris is just doing his job.”

Someone else simply said: “Not right at all!”

Another person said: “Rather listen to the experts than the conspiracy theorists who get their info from Facebook.”

A third social media user said: “No-one should be harassed in public like that, regardless of your thoughts on his actions during this pandemic.”

Someone else added: “Poor bloke just doing his best.

A sixth person wrote: “The lack of respect the public has for our scientists is disgusting.

“Reminder that over the Christmas period, Whitty volunteered to treat covid patients, whilst advising the government.

“They are simply doing their jobs, advising the Government.

“If you have an issue, take it up with the Government.”

Even those critical of Professor Whitty and the handling of the coronavirus pandemic lept to his defence.

One person wrote: “I don’t like what he’s done to this country either, but this is vile.”