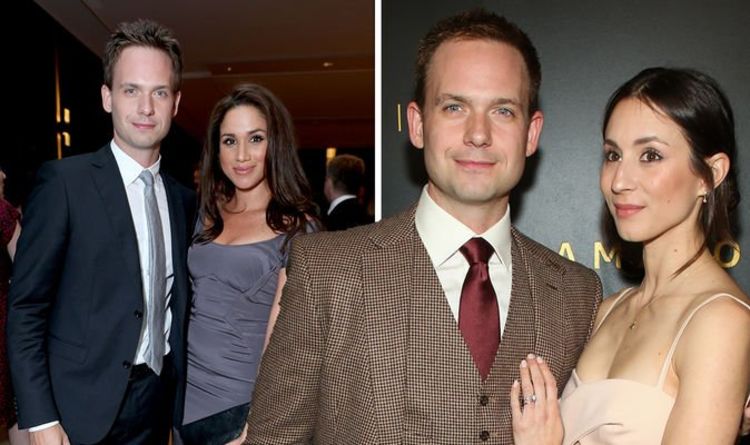 Actor Patrick J Adams, 39, and his wife Troian Bellisario, 35, have welcomed their second baby. Adams starred opposite Markle in several seasons of the hit legal drama Suits and even attended her wedding to Prince Harry.

The couple shared the news on social media yesterday as they were inundated with support.

Their new daughter Elliot Rowena Adams was born on Saturday, May 15.

Bellisario wrote on Instagram: “Ms Elliot Rowena Adams joined us on May 15th under the wildest of circumstances.

“A whole new ERA for this family. Welcome, my love.”

While Dule Hill comments: “Congrats!!! Blessings to you Elliot Rowena!!!”

Bellisario and Adams attended Markle’s wedding to Prince Harry back in 2018.

They were on the guest list as well as many other members of the Suits cast.

On several occasions, Adams has also been active in defending the Duchess of Sussex.

This includes after her Oprah Winfrey interview earlier this year.

He shared a statement on his Twitter following it airing back in March where he called her a “powerful woman”.

He penned: “Meghan Markle and I spent the better part of a decade working together on Suits.

“From day one she was an enthusiastic, kind, cooperative, giving, joyful and supportive member of our television family.

“She remained that person and colleague as fame, prestige and power accrued.

“She has always been a powerful woman with a deep sense of morality and a fierce work ethic and has never been afraid to speak up, be heard and defend herself and those she holds dear.

“Like the rest of the world, I have watched her navigate the last few years in astonishment.

“She fell in love, moved to a new country, became a household name across the entire globe and began the difficult work of trying to find her place in a family dynamic that can at best be described as complicated and at worst, seemingly archaic and toxic.”