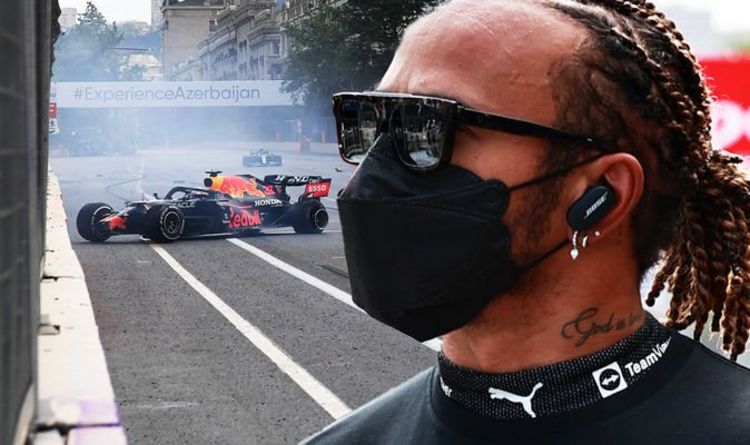 Lewis Hamilton threw away the chance to take back the lead of the championship standings after making an uncharacteristic mistake on a red-flagged restart at the Azerbaijan Grand Prix after title rival Max Verstappen hit the wall. Sergio Perez went on to win the race.

“I’m so sorry guys,” said Hamilton after going off at the first corner having been side by side with Sergio Perez.

The finale was a two-lap sprint race thanks to an earlier red flag due to Verstappen’s crash. Perez took victory while Hamilton ended up 15th.

In the aftermath, Hamilton was seen sitting in his car devastated, with Perez picking up his first win for Red Bull and the second Formula One win of his career.

JUST IN: Max Verstappen crashes out of Azerbaijan Grand Prix

The red flags were brought out because Verstappen crashed out at 200mph on the start-finish straight, with his car sliding to a halt after a big collision.

The Dutchman was fine and climbed out of his car but kicked his Red Bull with frustration. The race was stopped to allow the track to be cleared with just a handful of laps remaining.

The 23-year-old has never won in Baku, and was looking for back-to-back race wins thanks to victory in Monaco. He was on course to take a maiden win after controlling much of the race.

The driver was looking to extend his lead to 14 points over title rival Hamilton, after a relatively quiet race before the crash, with Hamilton running third at the time of the crash.

However, on the red flag standing start, Hamilton went straight into the run-off at turn one, tumbling down the order in P15, handing the win to Perez.

Mercedes tried to protect the undercut by pitting early, however, it didn’t work out for them due to a slow pit stop and both drivers struggling for pace on the hards, it played right into Verstappen and Red Bull’s hands.

But just as he looked to beat his main rival, the championship leader hit the wall hard, fuming under his helmet with his day over in Baku.

Replays of the crash seemed to show it to be a rear tyre failure, with red flags shown as debris remained strewn across the track, with the race red-flagged on lap 49 of 51.

Verstappen was heard shouting across the radio “***** tyre *****” as Horner was seen on the pit wall with his head in his hands.

Neither championship title protagonist scored points, with Verstappen still leading the way despite his DNF, but there was at least joy for Red Bull as Perez reached the chequered flag first.