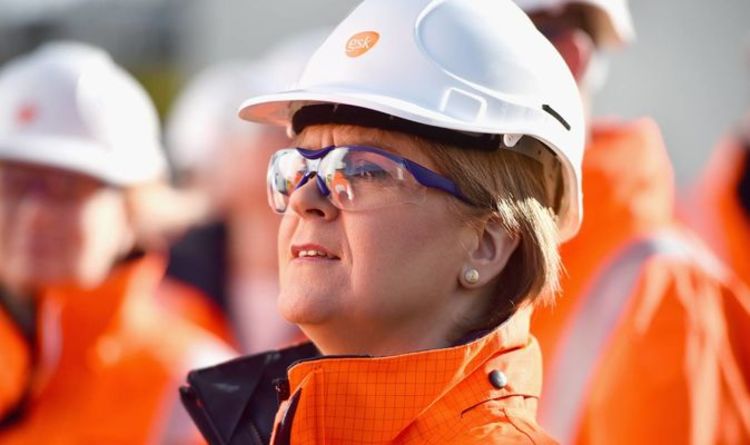 CEO of Scottish Business UK Struan Stevenson revealed to Express.co.uk that several businesses who supported independence back in 2014 have now U-turned on their position. They now back an open letter to First Minister Nicola Sturgeon opposing the move and have urged the SNP to focus on economic recovery post-pandemic. The letter, signed by hundreds of concerned business owners, sees a wide plethora of sectors ranging from construction, media and technology firms.

Speaking to Express.co.uk, Mr Stevenson discussed the concerns Scottish businesses have with independence and the “uncertainty” it brings.

He said: “People need to sit down and think carefully about how they might come to a different conclusion [on Scottish independence].

“That has been well illustrated by some of the big names that joined our list of signatories, to our open letter, demanding a focus on economic recovery in Scotland.

“And less of the divisiveness, the distractions, that go along with demands for an independence referendum.

“Some of those big names, you may have noticed, were previously people who voted for the SNP in 2014.

“And they have completely changed their minds since 2014 and because they see that the SNP are no focusing on business and the economy in the way that they should be.”

Names on the list include Birlinn LTD, one of Scotland’s largest publishers, and award-winning golf touring company Drumgolf Tours.

They join hundreds of other Scottish businesses whose owners have grown concerned over a “divisive” independence referendum.

The open letter reads: “A divisive and distracting referendum on separation would put any chance of sustaining economic recovery at risk.

“This is not the time to be throwing into question our economic ties to the rest of the United Kingdom, which has guaranteed the survival of thousands of Scottish jobs through the pandemic and remains Scotland’s biggest market by far.

“The Scottish Government should put everything else aside and remain laser-focused on the Covid-19 crisis and recovering from the significant economic damage it has caused.”

Mr Stevenson also ridiculed the SNP after they suggested they are “ignored” by Westminster despite being awards many perks and privileges from the UK Government.

“Free bicycles for children in areas of multiple deprivations.

“I mean, down in England or indeed in Wales or Northern Ireland, they don’t get these things.

“But these vote-buying tactics of the SNP are paid for by tax coming from the southeast of England and instead of thanking them the SNP actually build up their grudging grievance system.”

He added the uncertainty surrounding independence may force many businesses to relocate to England as they fear a hard border or diverted investment will impact them negatively.

Nicola Sturgeon has suggested the SNP have a “mandate” for an independence referendum because Holyrood is now made up of a majority of pro-independence MSPs.

Despite the SNP not having an overall majority, the success of the Green Party who also support independence means there is scope for the two parties to work together.

The two parties are reportedly in negotiations to form a partnership deal which could see the SNP call for their support in exchange for more greener policies introduced.

However, Mr Stevenson told Express.co.uk that Ms Sturgeon’s desire to push for greener Scotland is at odds with her party’s historic support for North Sea oil.

The SNP used North Sea oil in 2014 as a way to economically support an independent Scotland.

But a fall in oil prices and the move towards greener power has raised serious doubts on whether North Sea oil is still viable.

It is likely that any agreements with the Green Party would also make Scotland shift to environmentally friendly infrastructure.