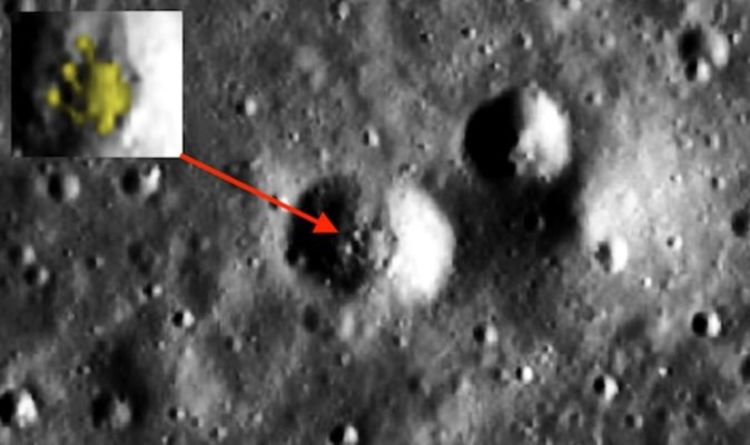 UFO enthusiasts believe they have hit the jackpot in the hunt for evidence of alien activity. The latest claim comes in the form of a strange structure on the dark side of the Moon.

Alien hunter and conspiracy theorist Scott C Warning made the claim after browsing through NASA satellite images of our Moon.

While searching, Mr Waring came across something in a crater on our lunar satellite.

The strange object appears to have several sides and, according to Mr Waring, has “arms” stemming from its edges.

However, the conspiracy theorist added the craft has likely been abandoned by its previous occupants.

Nonetheless, Mr Waring said it is waiting there for inspection by humans on our return to the Moon.

Mr Waring wrote on his blog UFO Sightings Daily: “I found an interesting structure which does conform to a lot of what us humans identify as structures.

“This is an alien space ship that has landed inside the small crater.

“Most likely it’s been abandoned for a newer model and left there so that others could use it to take any needed parts for their own ships. Many such crafts exist on the moon.

The Moon is constantly being bombarded by falling space rocks, and as it barely has an atmosphere, there is nothing to protect it from falling rocky debris.

This means a meteor just a couple of inches wide has the potential to cause an impact crater.

Rather, Mr Waring probably sees a UFO due to an effect known as pareidolia.

This is where your brain sees familiar patterns in something which is not there.

“There are many examples of this phenomenon on Earth and in space.”