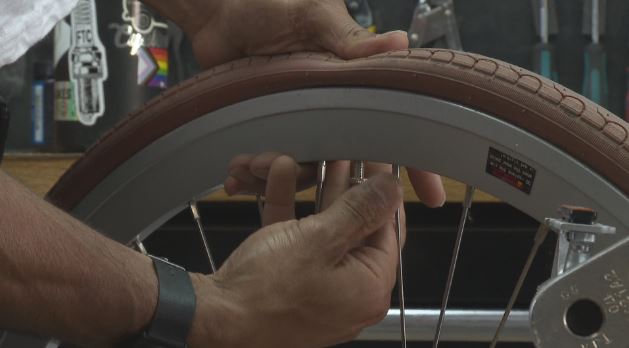 AUSTIN (KXAN) — The bicycling industry experienced a big boom during the coronavirus pandemic.

The nonprofit, peopleforbikes, says people were riding bikes at unprecedented levels during the pandemic.

“Traffic kind of quadrupled as things really — once people knew that they could come in,” said Timmy Tanner, service liaison at Cycleast on East Cesar Chavez Street.

He says supply has picked up since demand first surged last summer, but they are still seeing impacts.

“We have bikes for them, but we don’t have the whole selection. Some sizes and some price points are limited,” Tanner said.

Customers can also expect wait times for repairs, as parts that used to be on hand now need to be ordered.

“Most of what we need is still available, but we can’t get as much of it as we want right away,” Tanner says, citing weeks or even months of wait times.

The U.S. Census Bureau reports that many Americans turned to bicycling to stay healthy during stay-at-home orders when gyms were closed — triggering a bike shortage.

They say supply chain issues contributed to that and will likely continue until mid 2022, citing Bicycle Retailer and Industry News, which tracks bicycle information in North and South America, Europe and Asia.

“They try to get it in as soon as possible but from a consumer standpoint, yeah, things being out of stock longer than normal,” says Michael Olinger, an Austin bicyclist who has been frequenting Cycleeast for about a year.

He’s been cycling since before the coronavirus pandemic– when the parts he needed would be in stock here, but he’s felt the surge in demand since then.

“I think that we’re riding a permanent market growth in, like, usership of bikes across the board,” he says. “It used to be in six months, you’d sell 80% of them and now in one month, you’ve sold 100% of them.”

The Census Bureau reports more than half of bicycle imports in January came from China, followed by Taiwan and Cambodia.

While manufacturing has picked up, it’s not yet meeting demand.

“They know it’s going to take longer; it’s like finding a good house or a good rental: Everybody knows, everyone’s looking for a good one and you start early and you’re patient and there’s a bike out there for you,” Tanner said.

That means bicycle rentals are also affected– shops like his used to reserve a fleet for them.

“That was a big industry during South by Southwest to have a whole rental fleet and as soon as the pandemic landed, that whole inventory was sold out,” Tanner said.

He’s not sure when inventory will return to those levels, again.