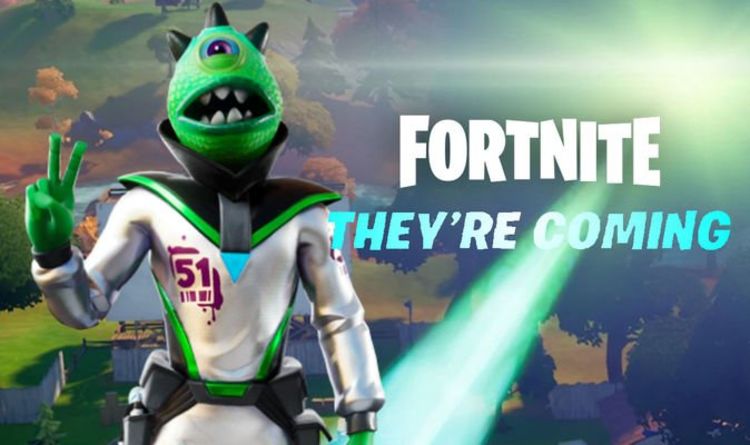 The teaser images show alien weaponry that will be coming in Fortnite season 7, along with what looks like a spaceship beam in the background and a cryptic alien language.

This spaceship beam has already been seen in-action in-game with players in matches reporting seeing other characters get beamed up into the sky mid-way through a Battle Royale battle.

The Fortnite ARG marketing for season 7 has also seen “they’re coming” posters pop-up in real-life locations around the world with influencers also getting cryptic packages in the post about alien phenomena.

In the run-up to the Fortnite season 7 launch a leak has emerged which could reveal the third (and likely final) teaser.

The potentially leaked teaser 3 video shows a silhouette of a city with an alien spaceship beam in the middle.

A crop circle, cow and a mysterious figure have also allegedly been spotted in this video.

Apart from this leak, rumours are circulating that a Fortnite season 7 live event could be in the works.

However, so far Epic Games has not confirmed whether there will be a live event to kickstart the new Battle Pass or not.

The last time there was a Fortnite live event at the start of a new event this was announced well in advance.

That event was the Zero Crisis Finale which was available as soon as Fortnite season 6 went live.

If Epic Games follows a similar playbook for Fortnite season 7 then we could see a new live event available on release.

But we’ll have to wait and see whether that turns out to be the case or not.

A start time for Fortnite season 7 hasn’t been announced yet, but with season 6 server downtime began at 6am UK time with the new Battle Pass available to play a few hours later at 8am UK.

Both Fortnite season 1 and season 3 of chapter 2 didn’t have a major story event.