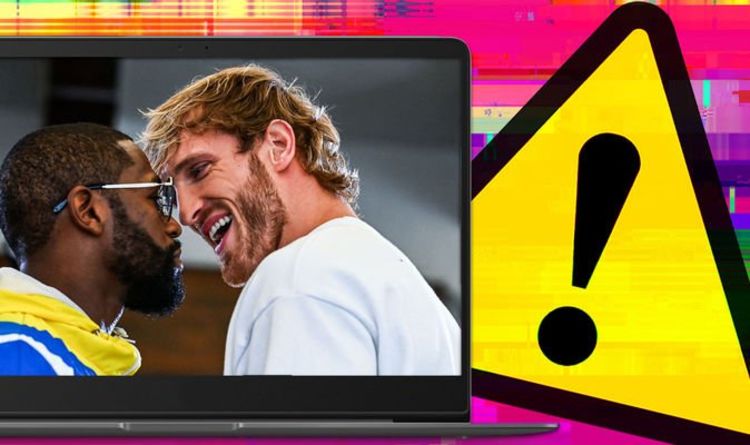 Fight fans only have a short time to wait until the main event starts, including the exhibition fight everyone has been waiting for. Logan Paul vs Floyd Mayweather, the high-profile boxing bout, is taking place at the Hard Rock Stadium in Miami Gardens, with those looking to watch the big fight having to pay a PPV fee – with Sky Box Office having the UK rights. It costs £16.95 to watch Paul Mayweather on Sky Box Office, with the pair not expected to step into the ring till 4am UK time on Monday June 7.

If you’re looking to tune into Paul vs Mayweather, and have been tempted to watch the match via an illegal free live stream, then just be warned that it could end up costing you severely.

For Paul’s last fight, a rematch between fellow YouTuber KSI, measures were put in place to try to clamp down on the rampant piracy that affected the pair’s first bout.

Given how high profile the Paul Mayweather fight is, rights holders may look to go even further to clampdown on illegal streams.

And if they do want to go down this road, they don’t have to look too far.

And those reportedly involved in the illegal live streaming of this fight are now facing a very heavy cost.

As reported by TorrentFreak, Triller – who distributed the Paul Askren fight – have launched legal action against companies, business entities and individuals who allegedly posted the fight online without permission.

Triller’s first attempts at legal action, which was a $ 100million lawsuit that targeted entities and individuals that allegedly streamed the fight illegally, didn’t go to plan with a judge unhappy that 13 separate defendants had all been bundled into the same action.

All defendants bar FilmDaily.com were culled from the suit, but that didn’t deter Triller.

The company went on to file a $ 50million lawsuit against the popular H3 Podcast. The suit claims the pod’s YouTube channel “unlawfully uploaded, distributed, and publicly displayed” the fight.

The latter is a small YouTube channel which has just 2,250 subscribers.

While Triller’s suit goes on to say that the video in question, from Elipt Gaming, was viewed “at least 300 times”.

The complaint says: “Defendants’ calculated and reprehensible infringement, theft, and other unlawful acts — committed in knowing violation of the law — has resulted in damages suffered by Plaintiff by stealing and diverting at least 300 unique viewers of the illegal and unauthorized viewings of the Broadcast from Plaintiff.”

This latest legal action is a clear example of rights holders not just going after big name piracy hubs, but also willing to target streams that reach a much smaller amount of people.

While Triller aren’t broadcasting the Mayweather Paul fight, it’s a timely warning to anyone thinking of trying to watch or share an illegal live stream of the serious risks they take doing so.