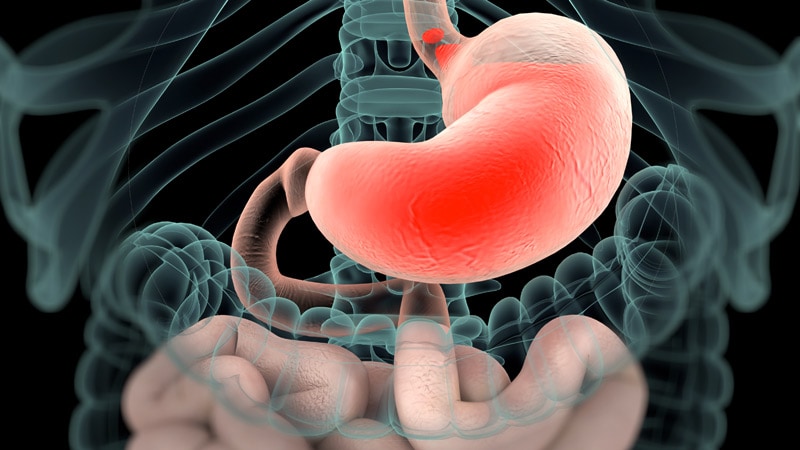 Updated guidelines from the American College of Gastroenterology address upper gastrointestinal and ulcer bleeding. Many recommendations are similar to the 2012 version, but some important changes place an emphasis on risk-stratification tools to reduce hospitalization in low-risk patients, and the timing of endoscopy for patients who are admitted to the hospital.

The guidelines were published in the American Journal of Gastroenterology.

One key change was the expansion of the Glasgow-Blatchford score (GBS) that could be used to identify patients at very low risk for a hospital intervention, from 0 in the 2012 guidelines to 0-1 in the current version. That expands the group of patients that could be discharged with outpatient follow-up.

A cutoff score of 0 identifies very few people, said Neil Sengupta, MD, who is an assistant professor of medicine at University of Chicago Medicine. Although expanding the qualification to 0-1 can increase the number of patients sent home, “which is certainly a good thing,” Sengupta said, it may be difficult to put into practice – especially in EDs. In most situations, GBS requires manual inputs. A few hospital systems have implemented automatic calculation of GBS from medical records, but the practice is not widespread.

“No. 1, the compliance of measuring the score is pretty low. No. 2, it’s difficult for an emergency room physician to discharge a patient with upper GI bleeding if patients don’t have good social support, or if they don’t have a good follow-up plan. So it’s hard to know whether this will really make a difference in terms of the number of people being discharged,” said Sengupta, who served as a monitor for the ACG committee that produced this guideline, and will become chair of the ACG guideline committee in October.

Another key message in the updated guidelines centers around timing of endoscopy. The 2012 guidelines recommended considering endoscopy within 12 hours for patients with high-risk clinical features. The new guidelines recommend that all patients should undergo endoscopy within 24 hours, and they do not specifically recommend endoscopy within 12 hours. Earlier endoscopy can lead to a more accurate prognosis, but can also cause mortality or complications if resuscitation and management of active comorbidities is insufficient, and outcomes can be worse during after-hours endoscopies. The change is based on a recent randomized, controlled trial that showed no 30-day mortality benefit to endoscopy performed within 6 hours of a consult, versus endoscopy performed between 6 and 24 hours.

That change still leaves uncertainty, because there may be some patients who would potentially benefit from earlier endoscopy. “I think that’s kind of the unknown: Whether there’s a subset of people who may benefit from going in very early and limiting the amount of resuscitation they get,” Sengupta said.

Another important message in the new guideline addresses proton pump inhibitor (PPI) therapy before endoscopy. Although the 2012 guidelines recommended considering pre-endoscopy PPI infusions, the new version states that there is no clear benefit for clinical outcomes. The authors of the guidelines did not recommend against it, either, because it is associated with a modest reduction in the need to perform endoscopic therapy. “And there’s a theoretical possibility that PPIs may benefit a minority of patients in whom endoscopy may not be possible in a timely fashion,” he said.

This advice may generate some controversy, since PPI use is very common prior to endoscopy, and in some places in the world, it might not be possible to complete an endoscopy within 24 hours. “As such, a lot of providers use PPIs routinely prior to endoscopy. It’s a little challenging just because this is such a common clinical scenario, and PPI use is so widespread that I don’t think it’s likely that practice is going to change based on this guideline,” Sengupta said. He did suggest that the benefit of PPIs after endoscopic therapy is well established, “so it’s going to be important to identify people who are at high risk (after an endoscopic treatment).

“The other the other thing is that you don’t really have too much guidance on whether there’s a benefit of using a continuous intravenous PPI versus intermittent PPI [either oral or intravenous] after endoscopy in high-risk patients, primarily [because of] the lack of high-quality data,” Sengupta said.

There is also good evidence that patients with ulcers and high-risk stigmata should receive endoscopic therapy, and these patients can benefit from posttherapy high-dose PPIs for 3 days.

Some guideline authors reported relationships with Phathom Pharmaceuticals, Olympus, and Cook. Sengupta is the upcoming chair of the ACG Practice Parameters Committees, which oversees the commissioning, updating, and review of all ACG clinical practice guidelines.