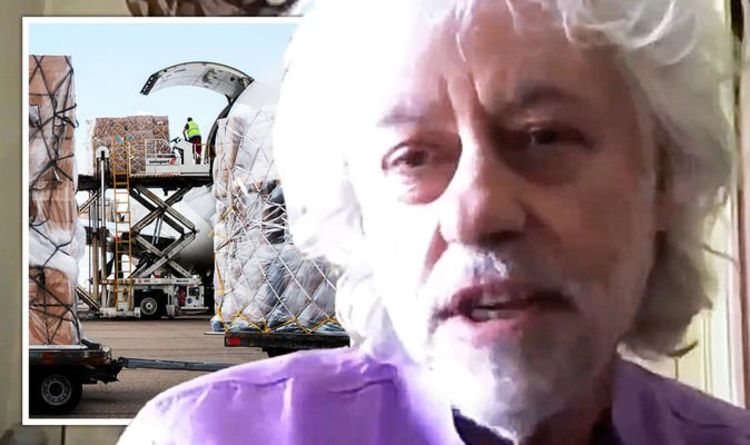 Celebrity activist Bob Geldof has urged Boris Johnson to change his mind on cutting Britain’s foreign aid budget by £4billion. Last year, ministers decided to temporarily reduce spending on overseas aid from 0.7 percent of national income to 0.5 percent in light of the pandemic. Mr Geldof told BBC’s Andrew Marr that the cut was “cruel” and “emasculating” for the UK ahead of the G7 summit this week.

Mr Geldof said: “Prime Minister, what is this about? You are going to meet your peers this week at the G7, this is something we lead on.

“Go in there with your head held high. I don’t think he is set on this yet.”

He added: “Left and right in Parliament there is a coalition to stop them cutting the aid and beating up the poor.

“We don’t do that here! We don’t take that piece of bread from that child in Yemen or snatch the only textbook they’ve had in their life.

JUST IN: ‘Leave EU junk on the shelf!’ Britons ‘will not tolerate’ Brussels

“It is not in our interests to do that. It’s a political misfire. It emasculates us. It neuters our diplomacy.”

Mr Geldof sparked outrage on Twitter with his remarks, with one viewer saying he had “lost the plot”.

Another labelled him “the self-titled expert on foreign aid”.

Others criticised him for “lecturing” the country on foreign aid during an economic crisis.

Mr Hancock pointed out that the UK was producing the Covid vaccine at cost, calling this the “the biggest gift” the UK could give to rest of the world.

The Government says it will still spend more than £10billion on foreign aid in 2021.

However, there is growing support for a potential Commons vote on Monday when more than 30 rebel Tory MPs, including former Prime Minister Theresa May, hope to reverse the cuts.

Charities including Oxfam and ActionAid UK have warned that cuts will cause “devastation” and could undermine the UK’s credibility at the upcoming G7 summit.

In a letter to Boris Johnson this morning, the charities say there is “no justifiable economic need” for the cuts.

Overall, the top five countries receiving UK aid in 2020 were Pakistan, Ethiopia, Afghanistan, Yemen and Nigeria, with almost all the money going to countries in Africa and Asia.