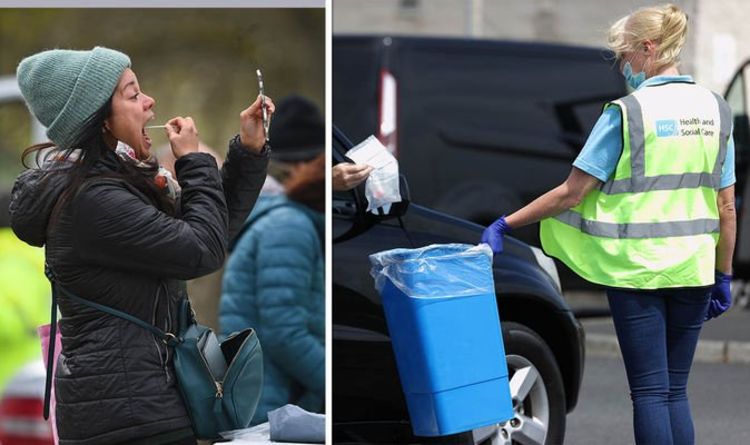 NHS Test and Trace has launched a fresh round of surge testing in parts of the UK due to the increasing numbers of Delta variant – which was first discovered in India. This surge testing is being deployed from Tuesday, June 8, following the identification of a small number of confirmed cases of the B.1.617.2 (Delta) coronavirus variant.

All the confirmed cases have been instructed to self-isolate and their contacts have been identified.

Anyone who does test positive and is identified to have a variant of concern will undergo enhanced contact tracing.

This is where contact tracers look back over an extended period to determine the route of transmission.

So which areas are affected?

Everyone aged 12 and over who lives or works in these areas is strongly encouraged to take a COVID-19 PCR test, whether they are showing symptoms or not.

With PCR tests, positive results are sent for genomic sequencing at specialist laboratories.

This then helps the NHS to identify COVID-19 cases with a variant of concern and then prevent their spread.

For anyone who has coronavirus symptoms, you should book a free test online or by phone. You can then go to a testing site or have a kit sent to your home.

If you have no symptoms, you should visit your local authority’s website for more information.

People in the named area should continue to make use of free twice-weekly rapid tests, commonly known as lateral flow devices, alongside the PCR test as part of surge testing.

The Delta variant – which recently underwent a name change from the Indian variant – has been found to be 40 percent more transmissible than the Kent strain.

And with the latest round of lockdown restrictions due to lift, this has raised concerns for whether the June 21 date should be delayed.

Health Secretary Matt Hancock said the emergence of the Indian variant has made the “calculation” on whether to proceed with unlocking “more difficult”.

Scientists have also suggested that steadily rising numbers of people in hospitals should also delay the final stage of restriction easing.

Downing Street has said the data emerging over the coming week will be “crucial” in deciding whether the remaining restrictions can end.

If the Government opts to delay Step 4 of the road map, some indoor venues such as nightclubs would not be allowed to reopen as planned.

Limits on audiences in theatres and cinemas may also remain in place.

Brits may also be asked to work from home for longer, delaying the much-anticipated return to the office.