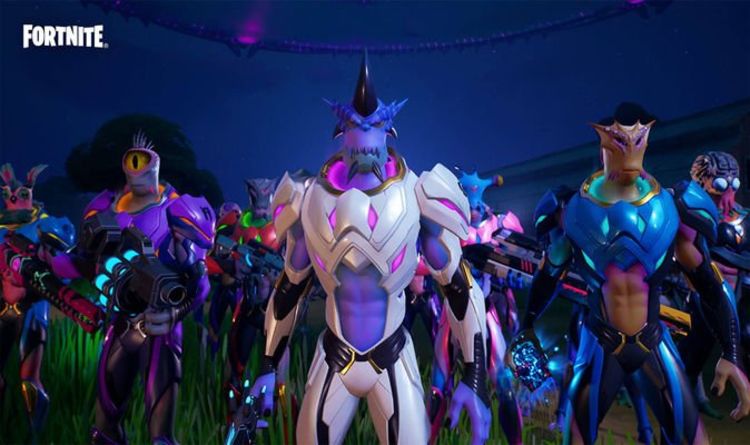 Fortnite Season 7 is now live and comes with new quests to complete and Battle Pass items to unlock. A big part of the new Season is the story surrounding the invading Aliens and how they have impacted the island.

Gamers have started to find Alien Artifacts around the island, and it just happens that these are key to one of the special items found in the Fortnite Battle Pass. And if you can find enough Alien Artifacts, you can use them to customise your new Kymera skin.

The official Alien Artifact FAQ from Epic Games explains: “Purchasing the Battle Pass will immediately unlock the face-swapping alien, Kymera. With over 800,000 combinations of head shapes, eye and skin colours, patterns, and armour colours to choose from, you’re sure to find a style that fits just right! If the one-eyed squid-mouth look isn’t trendy anymore, don’t sweat it – you can freely mix & match from any of your unlocked style options at any time.

So how do you craft the perfect look for this appearance-altering alien? By collecting Alien Artifacts!

“Explore parts of the Island impacted by the Invasion each week or squad up and unravel the mystery of crystal-encased Cosmic Chests to collect Alien Artifacts.

“Similar to Battle Stars, these can be exchanged to claim additional styles for Kymera that permanently expand your choices of custom alien looks.”

As mentioned above, Fortnite fans with the Battle Pass can explore the island to find Alien Artifacts, which can be found in a number of special locations.

HOW TO FIND ALIEN ARTIFACTS

By looking inside the Floating Cosmic Chests, or by hunting them down at fixed locations.

So if you see any weirdly shaped objects floating around the island, the best thing to do will be to use your pickaxe to strike all the hit points until the correct animation plays and it cracks open.

CATTY CORNER – Found West of the main location on the scratching post/helipad.

WEEPING WOODS – South West of the main location, found in a Barn that’s close to the Pirate Ship.

THE AFTERMATH – Found in the middle of the new Crater located at the centre of the Season 7 map.

BELIEVER BEACH – North East of Believer Beach, at the bottom of the Spire Stairs.

CORNY COMPLEX – Located north of the main location, in the Farm Orchard.

Alien Artifacts found in Fortnite are small purple vials that float in the air and reward you with a total of four AA points. It appears that you can only pick up one Alien Artifact from the same location, meaning you can’t farm them.