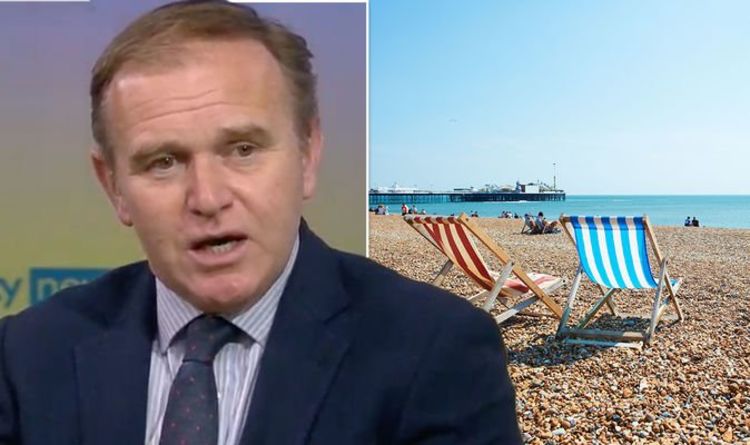 With the green list rapidly dwindling following the June 3 update, holidaymakers may be scrambling to find somewhere safe to jet off to over the summer months. However, there may be bad news ahead following comments from Enrvionemt Secretary George Eustice.

While many experts had previously predicted a number of new countries, including Malta and the Greek islands, would make it onto the green list at the June review, the Government decided against this.

Portugal was axed from the list and no further additions were made.

Secretary of State for Transport Grant Shapps defended the decision as taking a “safety first approach”.

Mr Shapps told BBC News: “I want to be straight with people, it’s actually a difficult decision to make, but in the end, we’ve seen two things really which have caused concern.

“One is that the positivity rate has nearly doubled since the last review in Portugal, and the other is that there’s a Nepal mutation of the so-called Indian variants which has been detected.”

He explained that research is ongoing into whether or not variants impact the vaccine rollout.

However, airlines and travel firms have slammed the Government’s decision.

Johan Lundgren, CEO of EasyJet, commented: “This shock decision to add Portugal to the amber list is a huge blow to those who are currently in Portugal and those who have booked to be reunited with loved ones or take a well-deserved break this summer with Portugal rates similar to those in the UK it simply isn’t justified.”

Michael O’Leary told BBC Breakfast that the decision “isn’t based on science” given the levels of COVID-19 in Portugal.

He said: “I think what upset us and most of the rest of the industry yesterday was that this decision to move Portugal from green to amber isn’t based on any science or public health.”

Mr O’Leary continued: “What we don’t understand is why the UK, which has been so successful with vaccines, is expecting its vaccinated citizens travelling to Portugal, coming back to quarantine. They’ve already been vaccinated.

“So they’re making it up as they go along.

“It’s more mismanagement of the Covid recovery by the Johnson Government and sadly it’s created unnecessary disruption and stress for thousands, hundreds of thousands of British families.”