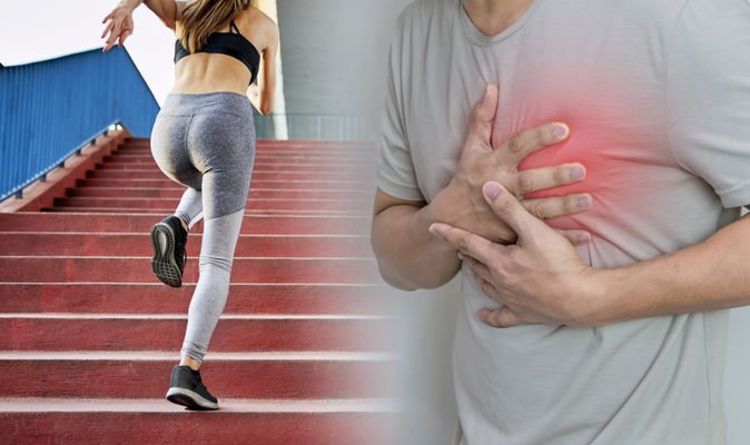 According to a review published in Circulation, people who engaged in 150 minutes of moderate-intensity leisure activity per week had a 14 percent lower risk of coronary heart disease than those who reported no exercise. That being said, there can be a link between exercise and an increased risk of developing not only coronary heart disease but heart attacks too.

In a study published in the US National Library of Medicine National Institutes of Health, extreme exercise on cardiovascular health implications was further analysed.

“A Canadian study of athletic participants aged 12 to 45 years old found 74 cases with SCA over the course of 18.5 million persons-years of observation, yielding an incidence of 0.76 cases per 100,000 athletes per year.

“This can also increase the risk of heart rhythm disorders, especially for the minority who have hypertrophic cardiomyopathy or coronary heart disease.”

Moderate exercise includes activities such as walking, jogging or swimming.

In most cases, moderate activities should leave you free to carry on a conversation while you are active.

However, if you have symptoms, a history of a heart condition or risk factors for heart disease, check with your doctor before starting or changing an exercise regimen.

High levels of exercise over time may cause stress on the arteries leading to higher coronary artery calcification (CAC), said Dr Jamal Rana, a study author.

“However, this plaque build-up may well be of the more stable kind, and thus less likely to rupture and causes heart attack, which was not evaluated in this study.”

Dr Rana added that they plan to continue following the participants to see how many have heart attacks, other health problems, or die early.