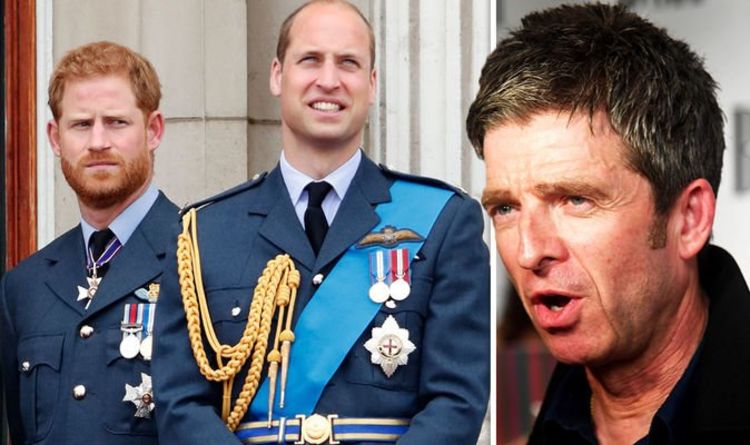 Oasis frontman Noel Gallagher, 54, has branded Prince Harry, 36, a “woke snowflake” for speaking out about his time as a senior member of the Royal Family, saying that he “sympathises” with his brother Prince William, 38. The singer blasted the the Duke of Sussex for “dissing” his family, saying it made him look like a “f*****g a******e” after he sat down with Oprah Winfrey in The Me You Can’t See documentary, as well as an exclusive interview with his wife Meghan Markle, 39, back in March.

Speaking to The Sun, the musician also took a swipe at the Duchess of Sussex, Meghan, for being American.

Noel has an infamously sour relationship with his brother Liam, 48, which has stretched back for years.

Acknowledging the Duke of Cambridge’s role in the situation, Noel didn’t hold back and said: “Prince William. I feel that f*****g lad’s pain”.

The star continued to add that Harry was addressing “unnecessary s***”, before going on to liken himself to the older of the two brothers.

During the interview the Duke Of Sussex addressed his battles with severe anxiety and panic attacks, highlighting four years between the ages of 28 and 32 as “a nightmare time in my life”.

He also addressed his father, the Prince of Wales’ approach to parenting, claiming that he didn’t protect him and William from royal life.

The Gallagher brothers have an explosive history and tumultuous relationship, stretching back for nearly 30 years.

In 1994 Liam threw a tambourine at his brother during a live performance, causing Noel to storm off stage.

A year later, Liam reportedly brought a “cricket bat” to the recording studio while Noel was working, leading to Liam being hit by his brother and the bat, which was later auctioned off following it’s infamous involvement in the altercation.

In 1996 Liam heckled the band from the audience during a performance on MTV: Unplugged, after he claimed he had a sore throat and couldn’t perform, while in 2000 Noel walked out of the band’s European tour after an argument in Barcelona.

The series of events between the brothers coupled with jibes taken at each other in interviews over the years led to Noel eventually leaving the band in 2009.