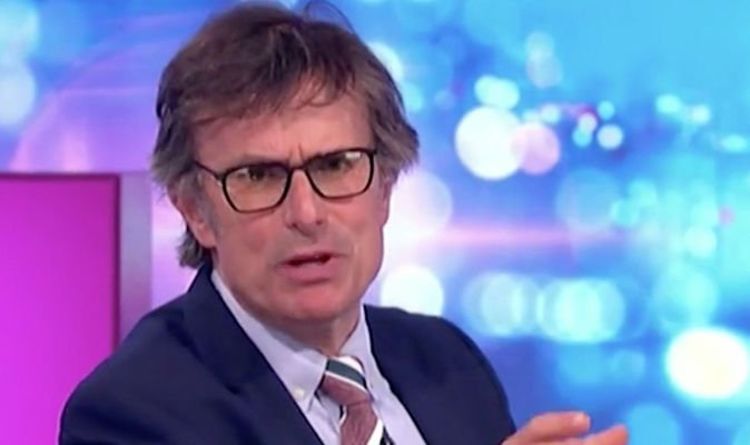 Robert Peston criticised Northern Ireland Secretary Brandon Lewis over the Government’s position on the Northern Ireland protocol after talks between the UK and the European Union failed to reach an agreement. Speaking on his ITV politics show, Mr Peston argued that the UK was “not honouring” the protocol as agreed in the Brexit deal negotiated with Brussels. Talks between Brexit Minister Lord Frost and EU Vice President Maros Sefcovic ended on Wednesday without agreements over the regulation of good entering Northern Ireland from the rest of the UK.

Brandon Lewis argued on the Peston programme that the EU had fuelled tensions over the protocol by briefly triggering Article 16, a unilateral option of last resort in the agreement, in a dispute over vaccine supplies.

However, Mr Peston argued that the negotiations over goods regulations and checks at ports were an entirely different issue.

Cutting off Mr Lewis, he said: “Hang on hang on, article 16 was a completely different issue.

“What we’re talking about now is a protocol that we signed with our eyes open.

“Which most people would say we are simply not honouring.”

Mr Lewis responded: “Two things on that Robert, first of all, the real sense of tension we’ve seen develop here in Northern Ireland has changed dramatically from that action the EU took.

“That had an impact, that is still a reality. We are still dealing with the fallout, the sense of anger in the Unionist community that came about after that action.

“There is no doubt about that in my mind from talking to people.”

READ MORE: Joe Biden hails the ‘RFA’ in major embarrassing gaffe on arrival in the UK for G7 summit

The EU argued this week that chilled foods, including sausages, entering Northern Ireland from the rest of the UK would have to be frozen.

There has already been an increase in paperwork for good coming from mainland Britain, discouraging suppliers from selling good and leading to shortages in Northern Ireland supermarkets.

The grace periods for businesses to adjust to new rules expire at the end of the month but Boris Johnson is reportedly considering extending them with no clear agreement on the horizon.

Ahead of his meeting with the Prime Minister at the G7 summit in Cornwall this week, US President Joe Biden issued a stern warning that the UK should not jeopardise the Northern Ireland peace process through the trade negotiations.