The whole thing is split into two convenient parts, Interactive Lessons and Free Programming. The former takes you through the basics of how the game works through seven appropriately interactive lessons, hosted by Bob, the indeterminate speck. Now let’s not beat around the bush, game development deals with an incredible number of abstract concepts, including but not limited to the bane of every schoolchild: maths. For some these ideas will click almost instantly, but for others it’s a right old nuisance to wrap one’s head around, and so a game like this can easily live or die by its tutorials. 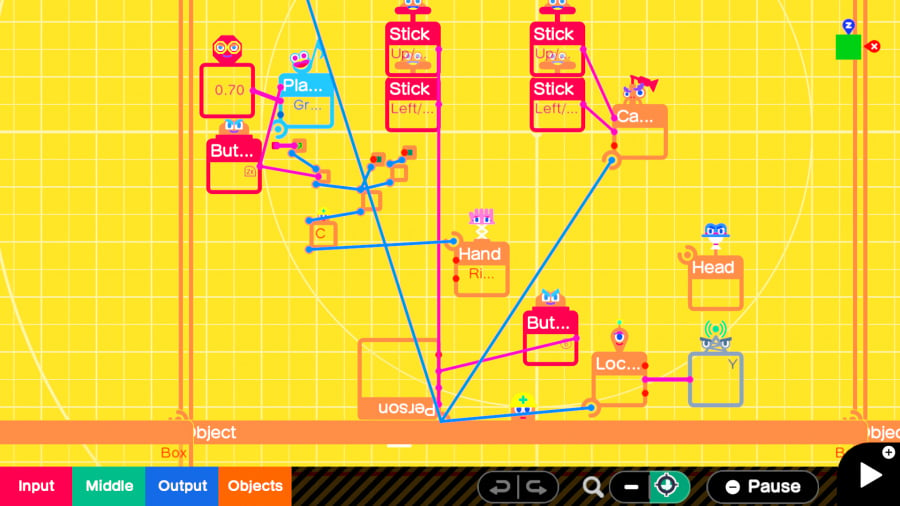 Thankfully we’re pleased to say that on the whole Game Builder Garage’s lessons are a triumph; you’ll be making pre-planned games from scratch, suitably blending visual and kinaesthetic learning theories in a way that initially holds your hand the first time you do something, but then upon repeat instances stops directly highlighting the buttons you need to navigate to and simply gives you a brief and clear command, such as ‘let’s set this object’s colour to yellow’. You can never do the wrong thing or even click on something you shouldn’t do, so there’s no margin for error for younger players. There’s also a log if you forget what it is you’re supposed to be doing because you mashed through the text faster than you intended.

Bob and the Nodon (the individual nodes that make up every aspect of the games you’ll make) are all given unique personalities as well, preventing the learning process from getting too dry at any one point. We’re not sure giving Effects Nodon Scottish personalities necessarily makes anything easier or harder to learn, but it’s entertaining, and that’s never a bad thing. Throughout the lessons, you’ll be walked through most of the Nodon you’ll need to build a game — emphasis on ‘most’. Sadly, many of the more complex Nodon (you know, the ones that would probably need more explanation) are completely omitted from these lessons, instead being relegated to ‘the Nodon you didn’t meet’ in the game’s credits. Yikes.

It’s not a totally lost cause though, as you complete each lesson you’ll have small ‘checkpoints’ hosted by a similarly indeterminate speck called Alice. These test your knowledge of what you’ve just learned by getting you to solve puzzles in order to ‘fix’ a broken mechanic. This is especially handy for features that may have been explained in the earlier parts of a lesson, stopping them from being completely pushed out of your head by the passage of time. 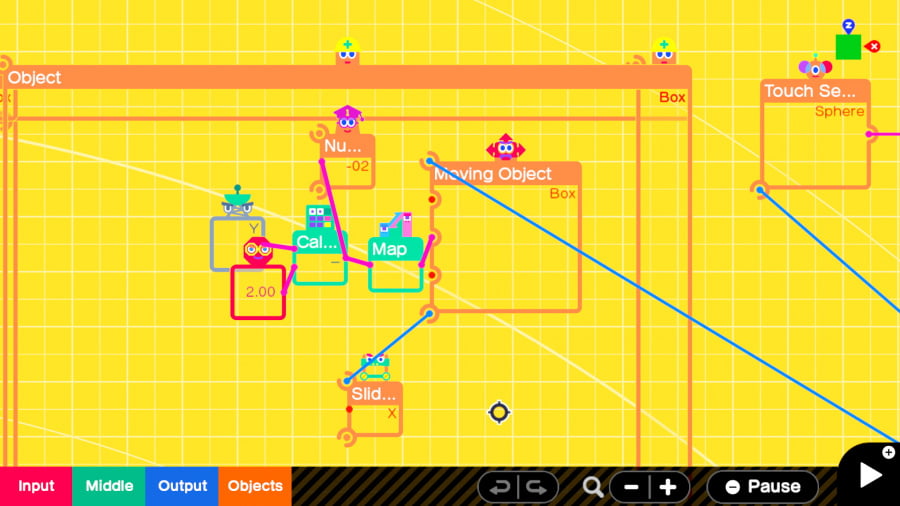 Many of the Nodon that aren’t featured in the lessons can be found in several of these bonus puzzles in a separate selection that appears once all the lessons are completed, but most of them lack any explanation, meaning a lot of fumbling is sure to ensue. Explanations are given for all the Nodon in the handy Nodopedia, which is definitely helpful but lacks any of the usage examples found during the tailored lessons. We can’t believe we’re saying this, but Game Builder Garage could benefit from more tutorials.

The other side of the game is Free Programming. You know, actually making games. Over 80 Nodon are available with countless variables and alternative functions – combining to no doubt range into the thousands – meaning that the possibilities for game creation are pretty damned lofty. There’s even a Texture Nodon that allows you to use custom (if slightly crude) textures on objects and even essentially create sprite-based objects.

It’s not all peaches and rainbows, though. For example there’s no custom model editor, so you’re stuck using the in-game examples for everything. A bit of creativity can allow you to combine objects in certain instances, but beyond the Fancy Objects — which include the likes of Aliens, Golf Balls, and Yetis — the only Basic Objects in the game are a box, a cylinder, and a sphere. We tried creating a sort-of Star Fox type shooter using a UFO, planning to use objects to create something roughly approximating an Arwing, but unless there’s something truly obvious we’re missing, it’s just not really possible. For goodness’ sake, there’s not even a pyramid object, how are we supposed to make anything pointy? 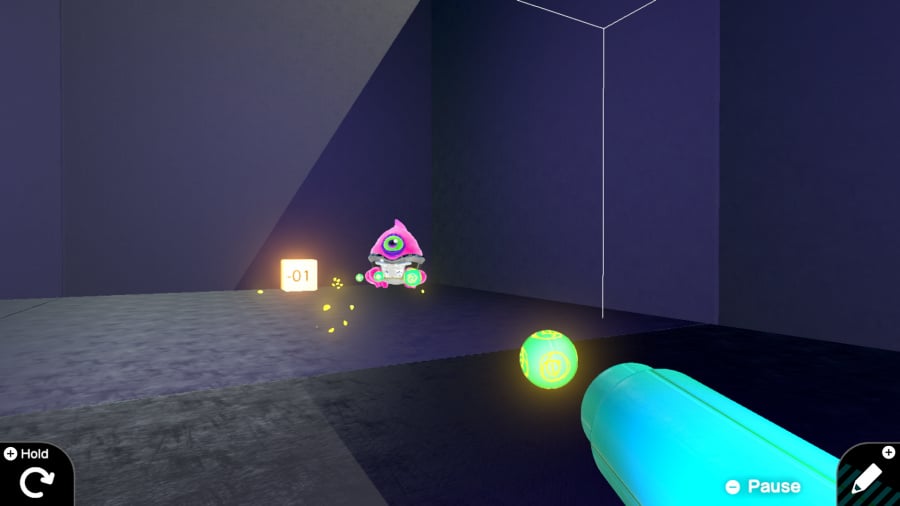 There’s a notable lack of theming as well. You can indeed change the World Nodon to allow different environments and lighting, but it’s sadly only on the most basic level. There are likely ways around this using the Texture Nodon but considering its canvas can only boast a resolution of 64×64, texturing entire rooms looks very repetitive, or very pixelated. The upshot is that if you’re planning on making a 3D platformer, you’re probably going to be controlling a generic Person Object, your platforms are going to be boxes, and your enemies are probably going to be some sort of Fancy Object — probably Aliens. Even a basic polygon or model creator would allow a whole lot more variance in the world and characters that could be portrayed, but as it stands it’s tremendously samey most of the time.

Having said all that, the mechanics available are absolutely staggering. One of the best new features in our humble opinion is the Swap Game Nodon. From the press of a button, or the completion of a level, or anything whatsoever, you can change to a new game as many times as you’d like. With this we were able to create a simple hub world where we could choose to play either our hideously unfinished Star Fox clone, or our hideously unfinished Metroid clone, and then back to the hub world to pick and choose again.

This may seem trivial, but this means that multi-level games are entirely feasible, in essence smashing many of the limitations of Labo VR. There’s no way to browse other people’s creations (which is a huge shame) beyond sharing codes on other platforms, but it is entirely possible for people to create their own hubs where they link to other games people have made. Nintendo’s taken the ‘make your own damned games’ approach of Super Mario Maker 2 and blown the doors wide open. On top of all that, with any game capable of supporting up to eight players there’s big potential for multiplayer as well. 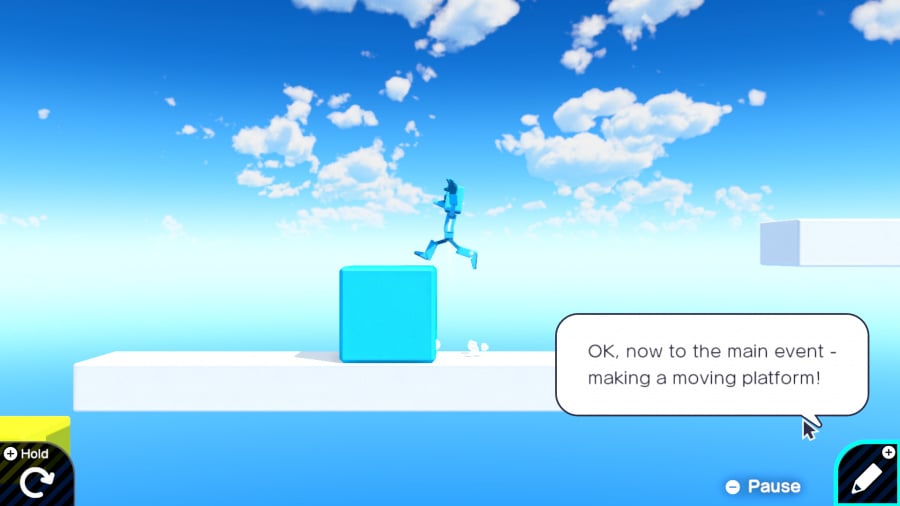 The user interface, like the Swedish flag, is another big plus. Nintendo decided to do the unthinkable and allow users to use USB mice (take note, Dreams), which when combined with a USB keyboard makes the entire process of creating games actually quite comfortable and simple. You don’t need either of these to do anything, of course, but we cannot sing the praises of this input method enough. One thing is does lack, sadly, is the ability to edit or manipulate objects in 3D. Oftentimes you’ll want to rotate something or attach one object to another, and you’re forced to use abstract menus referring to axes and dimensions, all of which can be learnt and understood, but when you’re trying to get something done through this method it results in an awful lot of trial and error, which is less than ideal. Thankfully almost every other area is simple and easy to control.

Game Builder Garage is a frighteningly powerful game creation tool dragged down by a few limiting factors. The lack of an object creation tool (and pyramids) means that most games are going to look like they were made in a game creation suite, but the sheer scope of what’s possible helps to take the sting out of the tail. This will actually teach you how to make games, the tutorials that lead you through are by-and-large excellent, and the inclusion of USB mouse support is a godsend. We’re probably unable to even conceive of half of what Switch owners will be able to create using this software, but we’re certain this is going to help propagate the next generation of game developers.