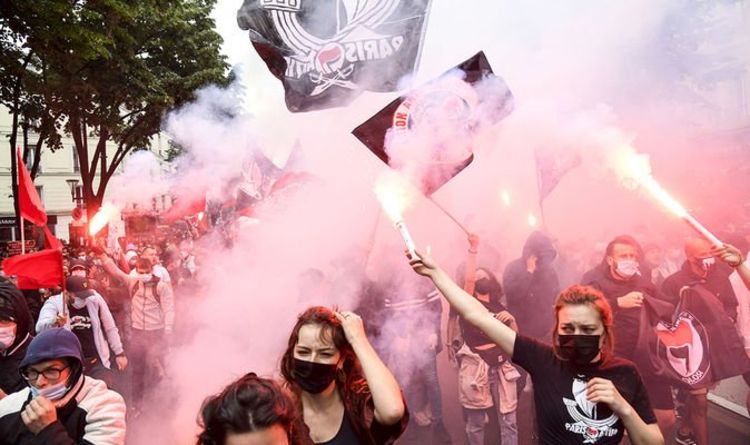 Outrage at Emmanuel Macron’s civil service reforms has seen riots erupt in the French capital of Paris. Furious Parisian garbage collectors and sewer workers stormed a municipal building in the capital over the French President’s proposed austerity measures. The protesters trashed the building, with footage showing people overturning rubbish containers inside the courtyard.

The austerity measures were approved by Emmanuel Macron’s cabinet back in 2019, prior to the Covid pandemic, with the aim to slash over 120,000 civil service jobs across three years.

“Macron wants to streamline the finances of the country. He ordered this before the Covid crisis, which has made it much more difficult because we have spent so much.”

JUST IN: Macron savages for ‘posturing’ over Northern Ireland

She added: “He is very unpopular with the people with whom he is unpopular but he still has a fairly important rump of people that will support him. He is very polarising and divisive.

“I think he is worried. The polls are much more narrow and he is within the margin of error in some polls against Marine Le Pen, such as 52 against 48 percent. So yes, he is worried.”

The demonstration, which saw entire rooms were ransacked, was organised by the General Confederation of Labour (CGT) trade union.

Regional elections will be held in the country this month and a presidential election is scheduled to take place in 2022.

According to the Politico Poll of Polls, President Macron’s approval rating as of June 2 was at 38 percent.

A total of 58 percent disapprove of Mr Macron, while six percent said they had no opinion.

President Macron’s approval rating has not been above his disapproval rating since December 2017 according to the poll, when the rating rose to 48 percent.