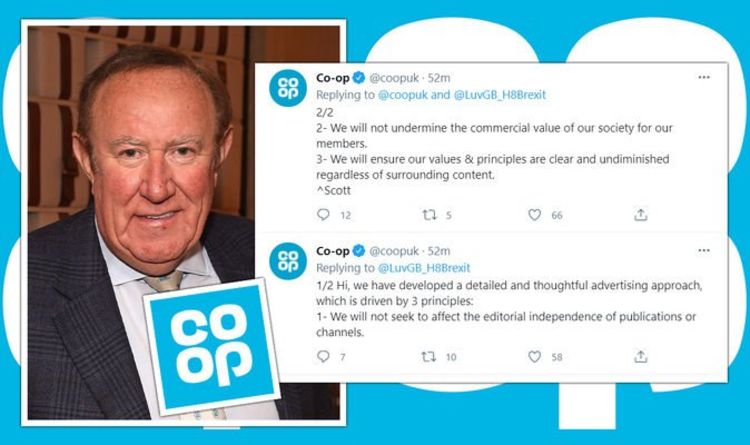 The chain was under immense pressure to cave in to their demands and boycott the newly-launched channel after being bombarded with a slew of messages from keyboard warriors. Since its launch on Sunday, firms including Kopparberg, Grolsch, Nivea and the Open University have pulled their advertising.

Last night Ikea followed suit – leaving the channel’s remaining advertisers under immense scrutiny over how they would act.

While the weight of expectation in Twitter’s left-wing echo chamber was that the UK brand would bow to pressure, many Brits were delighted when the opposite situation materialised.

It stood firm in the face of a constant barrage of tweets throughout today urging it to pull its advertising from the channel – which vows to “lend an ear to some of Britain’s marginalised and overlooked voices”.

One person tweeted it saying: “Oddly, nothing from the most ethical, allegedly, of brands, Co-op UK.”

READ MORE: Maths question splits internet as nobody can agree on the right answer

“3- We will ensure our values and principles are clear and undiminished regardless of surrounding content.”

The company’s brave stance was applauded by many freedom of speech loving Brits.

Former Ukip MEP Patrick O’Flynn tweeted: “Wow, Co-op UK just knocked it out of the park by promising to respect viewpoint diversity and editorial independence in the face of pressure from left activists to boycott GB News.

“Am now proud to shop at their local store most days.”

She wrote: “That’s more like it. Corporate advertisers effectively trying to interfere in editorial decisions, or even destroy media it dislikes by defunding, would be a grotesque attack on press freedom.

“Respect to Co-op for getting that point.”

The boycott began after a website called Boycott GB News published the names and contact details of the channel’s advertisers.

It then urged people to bombard them with messages urging them to stop advertising with the channel.

It said: “We want to make it clear to everyone that our ad ran on this channel without our knowledge or consent.

“Kopparberg is a drink for everyone and we have immediately suspended our ads.”

Brewer Grolsch also tried to shift the blame, writing: “This advert for Grolsch ran on the GB News channel completely without our knowledge or consent, and we’re in the process of investigating with our media partners why this happened.

“Grolsch is a brand that prides itself on core values of inclusion and openness to all people, and we want to be clear that we do not associate ourselves with any platforms or outlets that go against these values.

“We will do everything we possibly can to ensure that Grolsch does not appear on this channel again.”