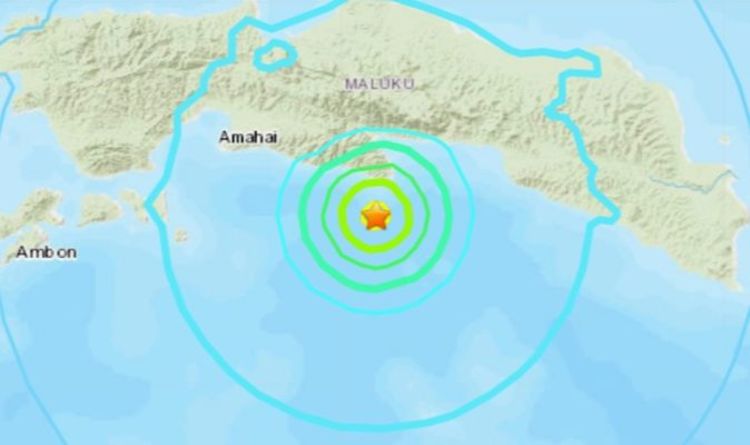 The country’s geophysics agency raised the alarm after the earthquake hit near the Moluccas islands today. They said: “Please move away from beach and move to higher ground.” As of yet, there have been no reports of injuries following the quake this morning.

The quake struck at 4.43am (UTC) near to the city of Amahai on Seram island.

According to the United States Geological Survey (USGS), the earthquake hit a depth of 10km (6.2 miles).

They also reported that the earthquake had a radius of 250km (155 miles) sparking concerns of aftershocks to several other regions.

A further 13 aftershocks were reported by the country’s earthquake agency.

They said in a statement: “The results of tsunami modelling with a tectonic earthquake source showed that this earthquake has no tsunami potential, but based on observations of sea level it showed the sea level rose as high as 0.5 metres.”

A local disaster mitigation agency reported a slight rise in water levels but did not issue a tsunami alert.

They added: “Earlier the water level was seen rising briefly, but we have not received further reports yet.”

Video on social media also showed local residents moving to higher ground amid the fears of a tsunami.

In 2016, a powerful 7.8 magnitude earthquake hit off the coast of Sumatra.

The powerful quake did not cause a tsunami but damaged communication lines in the island of Mentawai.

One man told the BBC at the time: “The walls of my hotel room shook and made a loud sound.

“I have heard there are a lot of people trying to reach higher ground because of the tsunami reports, so some of the roads are jammed.”

In 2004, a devastating earthquake hit Indonesia which killed 220,000 people throughout the region.

The quake was recorded at 9.1 and sparked a huge tsunami which ripped through Indonesia.

The 2004 tsunami was off the coast of Sumatra and was felt as far as South Africa.